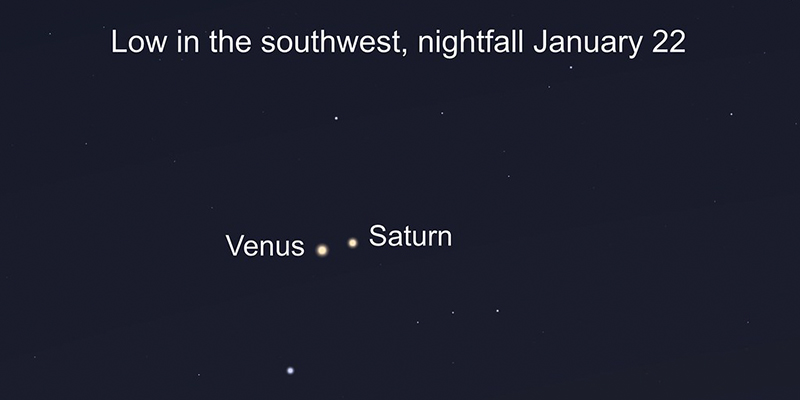 The new year opens with Venus climbing out of the sun’s afterglow. On Sunday, Jan. 22, Saturn drops past Venus as Earth’s orbital motion sends the ringed planet tumbling into the sunset. Look for the pair of planets very low in the southwest just as the sky darkens. 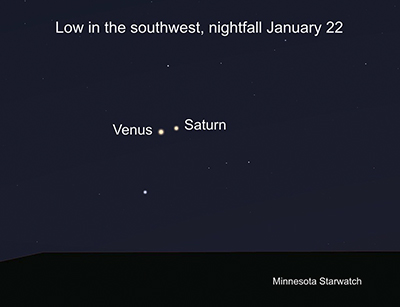 If you catch Venus and Saturn, also turn your eyes to Jupiter, the beacon high in the southwest, and high-flying, reddish Mars, the second-brightest object in the knot of winter constellations in the east. With the right timing, you can simultaneously view Venus — the brightest planet — and Sirius, the brightest star (after the sun) and the last of the iconic winter stars to clear the eastern horizon.

January’s full moon arrives on Friday, the 6th. It rises before sunset and becomes full at 5:08 p.m. After nightfall it shines to the right of the Gemini twins Pollux (the brighter) and Castor. Between about 9 p.m. and midnight on Friday the 30th, you’ll have plenty of time to watch a waxing moon of the next cycle glide close below Mars.

In the predawn sky, the Northern Cross lies on its side below brilliant Vega, the jewel of Lyra, the lyre. On the 18th, a thin waning moon rises close to Antares, the heart of Scorpius.

Earth reaches perihelion, the closest point to the sun in its orbit, at 10:17 a.m. on the 4th, when our planet reaches its top speed. Changes in Earth’s speed go largely unnoticed, but they show up in the length of the seasons. Because Earth goes so fast in the middle of its journey from the September to the March equinox, the combined fall-winter season is about seven days shorter for us than for our friends in the Southern Hemisphere.