Making the grade: Austin’s Diang put in the work in school to get back on the court this winter 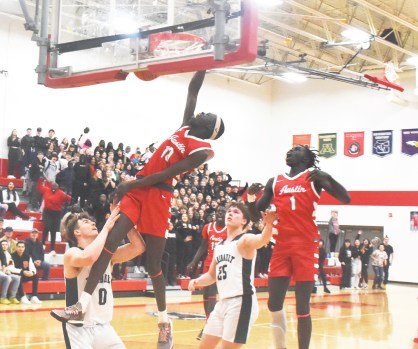 Austin senior Ben Diang throws down a dunk over Faribault’s Brady Schulz in Packer Gym Tuesday night. Diang worked overtime to get himself academically elgible for this season and it has paid off for him and the Packers. Rocky Hulne/sports@austindailyherald.com 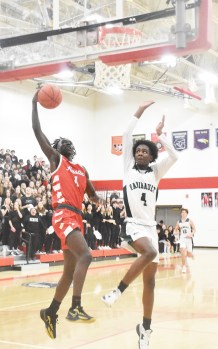 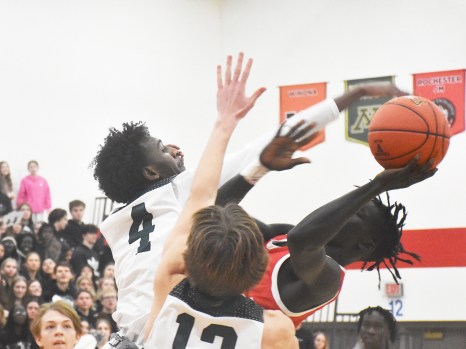 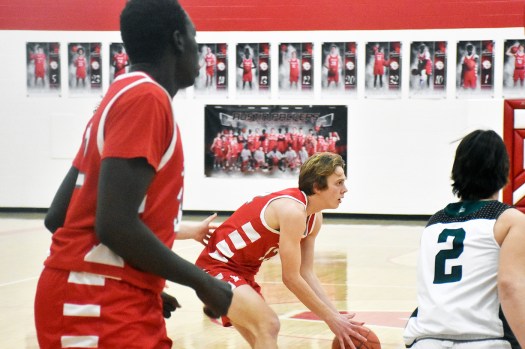 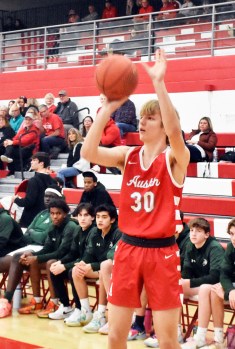 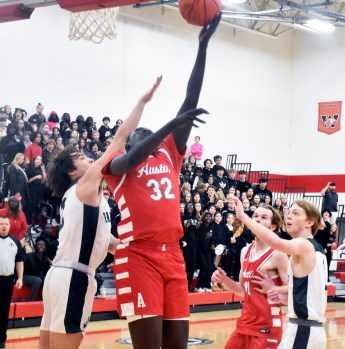 Austin’s Otong Nyikew scores in the paint for the Packers. Rocky Hulne/sports@austindailyherald.com

Austin senior Ben Diang had the entire Austin student section on its feet a few times as he threw down some dynamite dunks in the Packers’ 77-62 win over Faribault on senior night in Packer Gym Tuesday.

The dunks were impressive, but there is a lot more to Diang than being a high flying finisher.

Diang was one of those fans in the stands over the past three years and it wasn’t because he wasn’t good enough to make the team. Diang was academically ineligible as he humbly admits that his GPA sunk to as low as zero. That all changed, when he committed himself to the classroom and went to work over the past few years as he caught up on missed time and brought his GPA back to where he needed it to be to compete.

All of the extra time has paid off for Diang and now he’s having the time of his life with the Packers (8-4 overall).

“I’m loving every moment of it. When I caught that first lob tonight, I was so hyped. I’m glad to play basketball and I’m glad to be an Austin Packer,” Diang said. “It makes me feel alive and it makes me feel happy. I’m so excited for everything. I just want to tell the kids coming up in school that they really need to focus on school first. Academics cost me a few years of basketball. You need to be a student first, and then an athlete. Be a student athlete.”

Austin celebrated 12 seniors on Tuesday and Buai Duop led the way with 14 points and seven rebounds. Duop said this group has grown close together over the years and they have embraced the return of Diang this season.

“Ben’s energy, his bounce and his mentality has been big for us this year. We push him a lot. He’s like our brother and we want him to get to that next level. To get there, he has to focus on academics too,” Duop said. “I love each and everyone of these people. They’ve been there for me and I’ve been there for them. We love and support each other so much.”

The last time Diang played on a Packer basketball team was during his eighth grade season and it’s been a long road back. Austin head coach Jamaal Gibson admires Diang’s journey back to the court and he stressed the importance of Cabeen and her work behind the scenes in helping not just Diang, but many Packer basketball players with their academics.

“Ben is the epitome of someone who shows that just your basketball talent alone isn’t going to be enough to get you on the court. Because of the choices he made when he was younger and less mature, it kept him off the court,” Gibson said. “He got a ton of help from our faculty members. Jessica Cabeen was amazing for him. The last three years he’s had to work about three times as hard as any other student had to just to get eligible. He was doing online classes, summer classes and night schools. I’m grateful for Cabeen. She does so much for this program and she doesn’t get the love that she should.”

Gibson was able to get all 12 of his seniors significant playing time on Tuesday. He said all of them have meant a lot to the program in his first year as head coach.

“They mean a lot to me and that’s why I kept 12 of them; when people call me crazy for keeping 12 seniors, I tell them that they don’t know these guys like I do,” Gibson said. “These 12 guys represent everything that I want to go forward with Austin Packer basketball. They are great leaders and they can show our younger guys how to hold themselves on and off the court. I love these guys so much.”

The Falcons (1-12 overall) scored the first seven points of the game, but the Packers scored the next 19 and never trailed again.