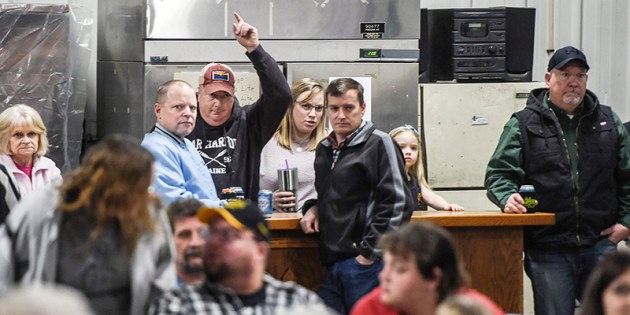 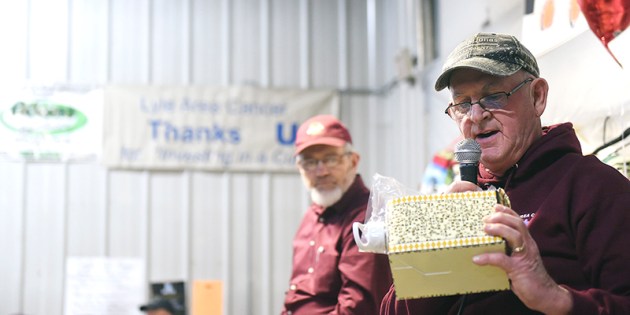 Darwin Small names off the next item for bid during the 44th Lyle Area Cancer Auction Friday night in Lyle. Eric Johnson/photodesk@austindailyherald.com 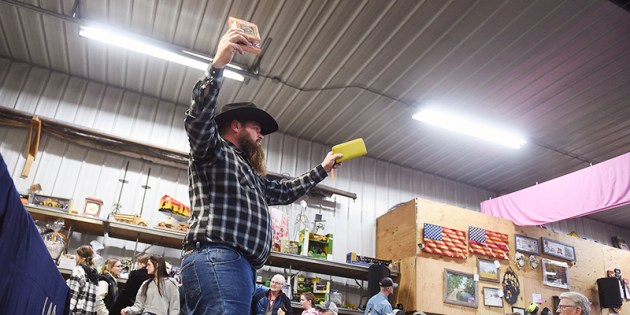 The 44th annual Lyle Area Cancer Auction kicked off Friday night in Lyle as organizers began the march to a target of $3.3 million raised over the four decades. Eric Johnson/photodesk@austindailyherald.com 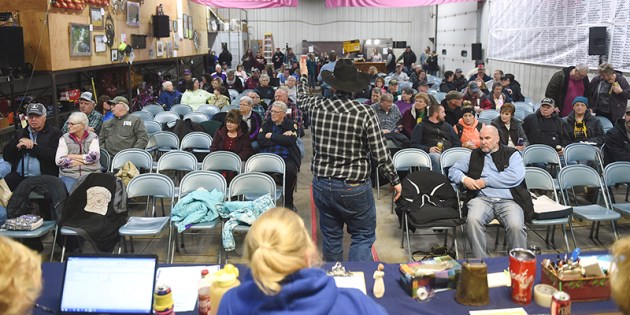 The Lyle Area Cancer Auction got underway Friday night for its 44th year in Lyle. The even continues on into Saturday and the money raised will be donated at the Eagles Cancer Telethon Sunday night. Eric Johnson/photodesk@austindailyherald.com 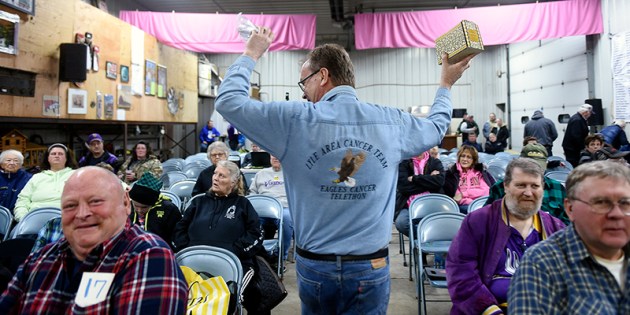 Larry Ricke parades an item up for bid through the aisle during the first night of the Lyle Area Cancer. Eric Johnson/photodesk@austindailyherald.com

Edits to reflect number of times volleyball was auctioned off, first night total

The Lyle Area Cancer Auction put up a lot of fat numbers this weekend during its 44th annual outing and the result was a milestone reached.

The auction, including all of the satellite fundraisers, raised a combined total of $212,500, which was in turn donated to the Eagles Cancer Telethon on Sunday in Rochester.

The number lifted the over four decade event to a little over $3.5 million raised and represented around 21% of the Eagles Cancer Telethon, which raised a little over $1 million.

It was a pretty hefty number for the telethon that also saw the Geneva Cancer Auction donate $168,000.

Ricke said that organizers knew pretty early on that this year was going to be good when in just the first night alone, the auction raised $39,000.

Combined with how the other events did, Ricke remembered thinking, “We’re going to clean house.”

Several of the satellite events also did very well in fact, including the annual Lucille Johnson Pool Tournament, held in Carpenter, Iowa that raised $37,000. Meanwhile, the side-by-side raffle, which was held instead of the Harley-Davidson motorcycle raffle this year, pulled in $29,000.

“We knew the side-by-side raffle was doing well,” Ricke said. “Those two events and all of the other events that already presented their checks did very good.”

Meanwhile, a volleyball donated by 15-year-old Rebecca Van Hooser, who was diagnosed with Hodgkin’s Lymphoma in April of 2021, raised almost $5,000 after it was auctioned a total of four times when it was donated back to the LAC.

All in all, this weekend’s final total showed what a small community can do and continue to do for a good cause.

“It’s awesome,” Ricke said. “It’s being thankful for everybody that did something or anything to do with it. Any of the events Cans (for Cancer), the pool tournament, Crop (for a Cure), Quilting (for a Cure) — it didn’t matter. We can’t thank them enough.”