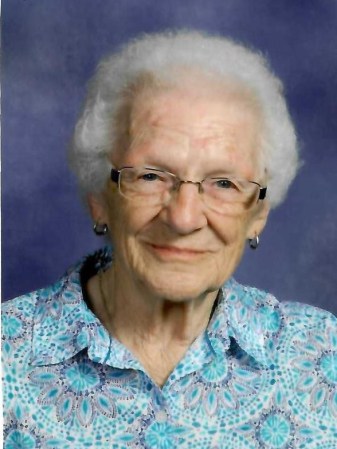 Joann Heimer passed away peacefully while surrounded by family at her home in Adams, Minnesota, on January 13, 2023, at the age of 93.

Joann Florence (Frein) Heimer was born on May 5, 1929, to Math and Elizabeth (Gilles) Frein on a farm near Stacyville, Iowa. She was the youngest of ten children. Throughout her childhood, her family lived on many farms in the McIntire, Meyer, and Bailey areas of Iowa.

In 1947, Joann met Eugene R. (Gene) Heimer at the Oasis Dance Hall in Austin, Minnesota. On October 30, 1948, they were united in marriage at Queen of Angels Church in Austin. Soon after, they moved to Stewartville, Minnesota, where they opened Stewartville Dry Cleaners in 1950. In 1954 they moved into a new building in Adams, Minnesota and opened Gene’s Cleaners and, later, Adams Sport and Marine Shop. Gene and Joann lived above the shop where they raised their nine children.

After closing the business in 1994, they moved to a small house in Adams, Minnesota.

Joann’s unwavering faith and dedication to the Catholic Church were evident in all aspects of her life, as she served God, family, and community. She was a member of Sacred Heart Catholic Church and Sacred Heart CCW, and served as crossing guard for many years for Sacred Heart School, Adams American Legion Auxiliary, and Adams Area Health Care Auxiliary Center. She worked at the Adams Locker and then the Adams Healthcare Center, from which she retired.

Mass of Christian Burial will be celebrated at 11:00 am on Friday, January 20, 2023 at Sacred Heart Catholic Church in Adams with Fr. Antony Arokiyam and Fr. Greg Leif concelebrating. Interment will follow at Sacred Heart Catholic Cemetery. Visitation will be at the Adams Funeral Home from 4:00 – 7:00 pm on Thursday, January 19, and will continue on Friday morning at church, for one hour prior to the Mass.