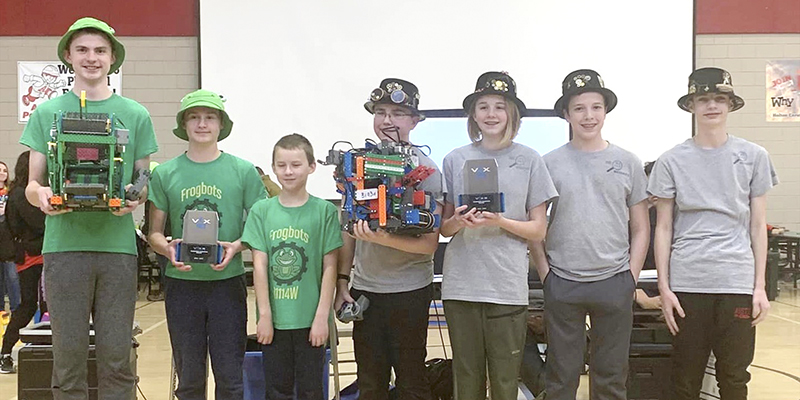 The Frogbots, left, out of Grand Meadow won the excellence award and the Microbots were Robot Skills Champions at this past weekends VEX IQ Slapshot competition at IJ Holton Intermediate School. Photo provided

Twenty-four teams from Minnesota competed in the first Vex IQ tournament held at IJ Holton on Saturday, Jan. 21. The teams competed in the Vex IQ Slapshot competition where they had one minute to get 45 discs out of the dispensers and into the goal zone. Each team had eight qualification matches where they formed an alliance with another team to score the highest points possible.

The competition also has an individual skills field where teams have three opportunities to score points using their driver skills and an autonomous portion where the teams program a code into their robot.

Representing Austin were the Gear Shifterz and Dead Treez from Southgate Elementary School and RoboKnights A and RoboKnights B from Neveln Elementary School, and a homeschool team the Microbots. The Spam Bros represented Brownsdale. There were also four teams from Sacred Heart, six from Southland, as well as teams from Grand Meadow, Faribault, Kimball, and St. Cloud.