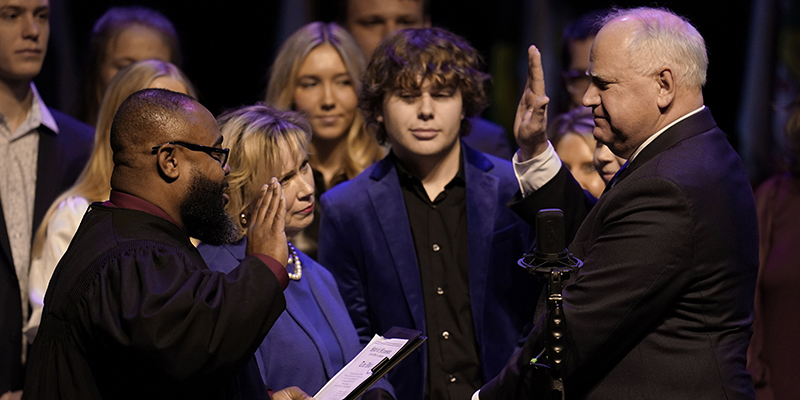 Democratic Gov. Tim Walz pledged Monday to make the largest investments in public education in Minnesota history as he took the oath of office for his second term.

Minnesota has a “historic opportunity” with its $17.6 billion projected budget surplus to become the best state in the country for children and families, the former teacher said during inauguration ceremonies at the Fitzgerald Theater in St. Paul. He’ll unveil his two-year budget plan in three weeks but is expected to roll out some major proposals sooner.

“Now is the time to be bold,” Walz said. “To build that bright future for Minnesotans. And now is the time to deliver. We can lead the nation in ending child poverty, making sure that every child receives that world-class education. And in doing so, we’ll continue to make sure that Minnesota is the best place to raise a family.”

Walz said his administration made “historic strides” in its first four years despite the global COVID-19 pandemic, the nationwide and international racial reckoning that followed the murder of George Floyd by a Minneapolis police officer in 2020, and an era of deep political divisions. But he said much more work lies ahead.

The governor said his agenda for the 2023 Legislature, which will convene Tuesday, will include free school lunches, more funding for special education and mental health, incentives for increasing teacher diversity, a ban on so-called conversion therapy for LGBTQ kids, and paid family and medical leave for their parents. Walz said the Democratic takeover of the Legislature after eight years of divided government makes him optimistic about succeeding.

“The era of gridlock in St. Paul is over,” Walz proclaimed.

Ellison took his oath from new U.S. District Judge Jerry Blackwell, who was a star of the prosecution team that the attorney general assembled to convict former Minneapolis Police Officer Derek Chauvin of Floyd’s murder.

“In prosecuting the people who killed George Floyd, we showed that no one is above the law, and no one is beneath the law,” said Ellison, the state’s first Black attorney general. “We believe in equal justice before the law.”

Diversity, inclusion and racial justice were major themes of the festivities, which featured Ojibwe, Dakota and African American speakers, singers and honor guards, and prayers from Muslim, Jewish and Christian faith leaders.

Flanagan, a member of the White Earth Band of Ojibwe, took her oath from Judge Sarah Wheelock, the first Native American on the Minnesota Court of Appeals.

The lieutenant governor celebrated “a government that looks more and more like the people of Minnesota with each passing election.” She also highlighted the administration’s efforts to build lasting partnerships with Minnesota’s 11 sovereign tribal nations.

Despite all the divisions of the last four years, Walz said he believes in his 2018 campaign theme of “One Minnesota” more than ever.

“I hope Minnesotans and all of you that are here and are listening saw yourself reflected on the people of this stage,” the governor said. “The sense of who we are as a state. The sense that you belong here. When you hear inclusion … it’s being embodied right in front of you today.”