Full STEAM ahead: STEAM day opens world up to students 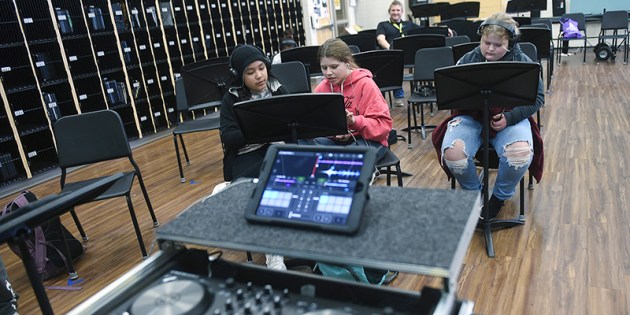 IJ Holton Intermediate School students listen to their songs before getting their attempt at the mixer during DJ class as part of STEAM DAy at the school. Eric Johnson/photodesk@austindailyherald.com 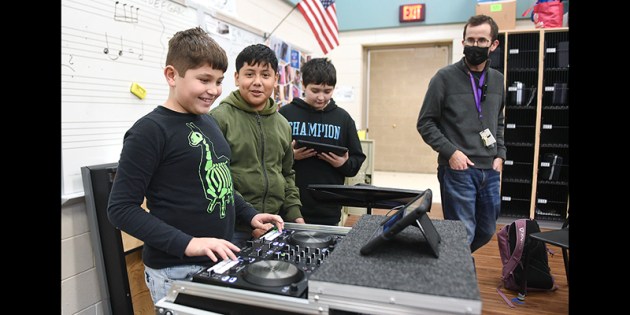 Trey Williams works on his musical piece at the mixer during a DJ class as part of STEAM Day last month. Waiting their turn is Ivan Alegon Sanchez and Jordan Vaughn (right). Eric Johnson/photodesk@austindailyherald.com 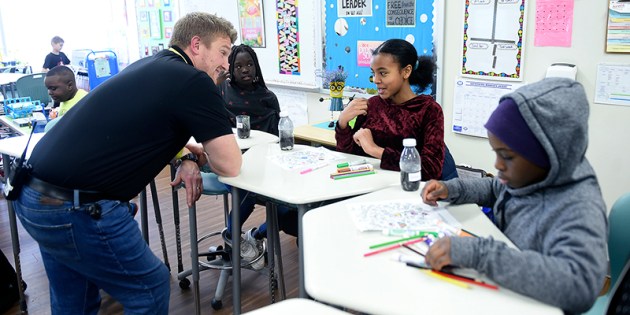 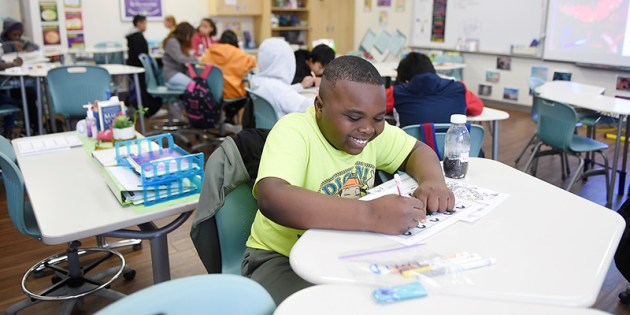 Like most Friday’s this year at IJ Holton Intermediate School, students were busy getting ready for their final hour of the day, taking the time to get organize and familiarize themselves once again with projects they had been working on in the weeks prior.

It was STEAM day.

Assistant Principal Blake Henely stuck his head in one classroom and then the next as the students picked up their projects to eagerly continue where they left off.

While not dissimilar to the STEAM and STEM-based curriculum the school embraced upon its construction, it is the result of a conscious effort to reaffirm that curriculum in a fun way that opens doors not only for students but for teachers as well.

“The process started five years ago with (then superintendent) Mr. Krenz; that he wanted to get the STEAM roots back in and established in IJ to where it was first at,”  Henely explained.

A STEAM team was developed and began looking at the heart of what STEAM day wanted to accomplish.

First and foremost it wanted to address inequities in learning and was to focus on inclusion of the diverse population that walks the halls of the school.

Even though the roots were planted five years ago, this is just the first year of STEAM day because of a familiar pattern arose thanks to the distraction that was the COVID-19 pandemic.

“Ultimately we paused, canceled and waited,” Henely said. “We got to the point where we either have to abandon this idea, which we didn’t feel good about, or we just have to move forward and do it. We have to just try.”

The initial planning stages of STEAM day called for a pilot program that put the program in just a few select classrooms just to see how it would roll out and how staff would adapt.

But with the delays in the program and the eagerness to get the program off the ground, staff behind the program went fully forward.

“Instead of piloting with two teams, we did it building wide,” Henely said.

In all, 36 different STEAM courses were created and assigned to students and that the last 55 minutes of each Friday would be dedicated to the project.

To get to that point the team reached out to other schools in the state who had developed similar programming, including Edgewood Middle School in St. Paul, which had devoted an entire day rather than just 55 minutes to the programming.

They also relied on resources from the University of Minnesota’s Learning Technologies and Dr. Lana Peterson, which had originally connected IJ’s team with Edgewood.

Training for staff came from the Minnesota Science Museum. Math teacher Lisa Lage, who’s STEAM day projects are  centered around her love of reading, is one of the members of the planning team for STEAM day.

She said the team’s work with the Science Museum was among some of the most impactful teacher training she’s ever experienced.

“It was by far the best professional development I’ve done in my entire career,” she said.

Through the Science Museum training, staff learned how to approach the idea of equitable learning and open up the world of science to students. However, it’s not just the hard science people are used to. It’s also those areas that science, math and the arts affect in one way or another that normally wouldn’t be considered.

To that end, it also became about getting away from specific mindsets that have rooted STEAM education in the past.

“We have to get away from this concept of it’s always engineering and building,” Lage said. “And we need to look at how these jobs are and how does what we’re learning and these skills we’re teaching in science, technology, engineering, arts and math relate to the real world and these different jobs.”

In order to do this, those teaching these activities and classes often had to put in extra work to do the learning themselves.

It was no small order to get to where they needed to be.

“It’s a lot of work for us,” said math and science teacher Patty Schafer, who also was part of the initial planning team and who is teaching her students about meteorology on STEAM day. “We’ve worked really hard toward getting this to work and the scheduling.”

In an all-encompassing sense, STEAM day has been a fun and new way to introduce students to new worlds.

There is no conscious effort to push students toward different jobs, but there is an effort to open up possible pathways for students to consider. To know what the future holds.

“Their world is very small,” Lage said. “They’re not seeing all of these great opportunities that are out there. By developing passions and drawing connections to these other ideas and saying, ‘oh, wait. That’s science?’”

It’s also been another opportunity to continue fostering the excitement of learning.