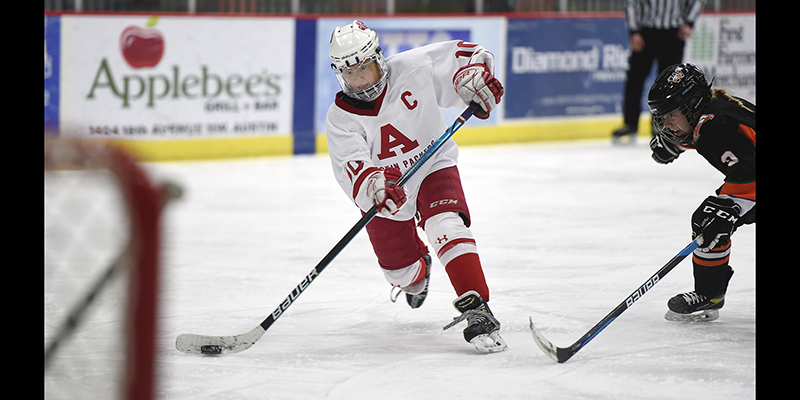 “The secret of life is to fall seven times and to get up eight times.” — Paulo Coelho

On Thursday night, the Austin Packers girls hockey team lost 8-2 to Winona in Riverside Arena leaving them with just a 1-14 record going into the last part of the season.

We don’t state this simply to remind these girls of a rough year, but we have to state the present to think about the future.

From the outside looking in, you can look at this program and lament how tough things are going. We can guarantee that it’s probably not a lot of fun and in a lot of ways it’s may not really be fair.

Austin is a young team, often facing off against much older girls leaving the results fairly obvious, but there is a future. The Packers were able to get several break away looks at the goal, particularly in the second period and eighth-grade goalie Chloe Schaal had 23 saves, many of them on shots around the net.

This is the moment to learn perseverance. Throughout the night, even when losing, the girls were able to generate smiles and remind each other to keep their heads up.

We know that to many this may seem cliche or even a little patronizing, but the first step in getting better is to understand that you can get better. With heads down, the eyes can’t see the future and there is a future if these kids can continue to find fun in playing with each other and if they keep working.

Their job is not going to be easy and the reality is some of these players — seniors and juniors — may not be around for the turnaround, but they can help create the little victories that plant the seeds for what is to come.

Most importantly, we hope people take the opportunity to remind these girls that this is a game. Even though nobody likes to lose, the world will not stop spinning and in everything there is something positive to take and draw experience from.

Along with that knowledge comes the reminder that each step is something new. Wins and losses are just numbers, but growth is fundamental and in the end we hope that these girls stick with it and keep pushing forward to find improvement even in the mundane and small victories.

Because it’s a start.