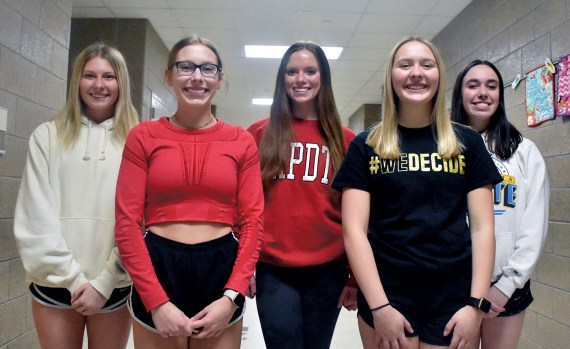 The Austin Packer Dance Team is headed down the final stretch of another grinding season and it is relying on its captains to keep the team focused as it closes in on the big meets ahead.

The Packers, who won their first state title last year, will compete in the Big Nine meet at Rochester Mayo at 11 a.m. Saturday and the section meet is also drawing closer on the calendar.

The captains, who include Chloe Jenkins, Maddie Staska, Nora Tweeten, Kara Wolfs and Lilly Flaherty have been down this road before and they are embracing their final run with the squad.

“It’s really special and I really appreciate the chance to be a captain. The challenge is that we graduated almost half of our team from last year and we’ve had to show the team what it means to put hard work in,” Tweeten said. “We’re a family and I think it shows on and off the floor. I’m going to miss that next year. We all work towards a goal and we make it happen.”

Staska said last year’s state title showed her how far hard work can go. This year, she’s focused on keeping the attitude positive and she’s relished the time that she’s had in and out of the gym with the team, who she considers to be part of her family.

“I learned that we’re all capable of anything. We’re going to decide how well we’re going to do and we have to put in the work,” Staska said.

Jenkins has seen this team grow through dedication to the sport.

“We’ve had indoor practices, outdoor practices, and we’ve even practiced (unofficially) on snow days,” Jenkins said. “We’ve been putting in lots of work. I hope the outcome is good.”

Flaherty said the Packers are often driven by the closeness they have as a group. That dynamic has come from years together in and out of practice.

“We just have a really special bond that other sports don’t really get,” Flaherty said.

APDT has competed in 20 straight state meets and the expectations are always sky high for the team, no matter how much experience is on board.

“We have to get the newbies on the train,” Wolfs said. “You have to push yourself and you have to really want to be the best you can be. Even winning state last year isn’t going to stop us from working hard. We’re still not the best and we want to even be better than we were last year.”