Abortion foes in Minnesota rally at Capitol on Roe anniversary 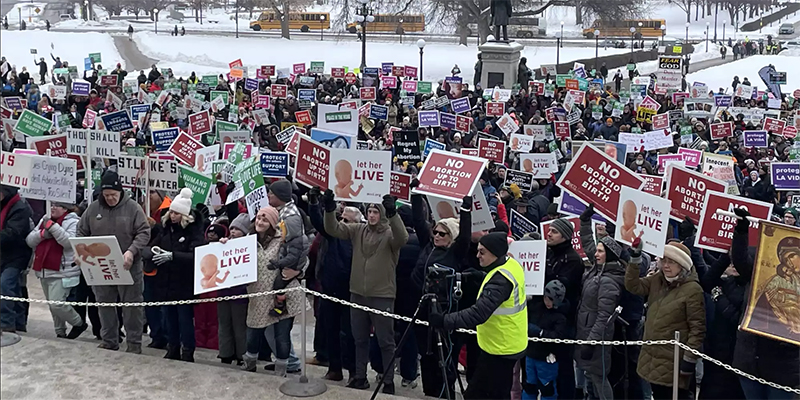 Thousands gathered on the grounds of the Minnesota State Capitol Sunday afternoon to mark the 50th anniversary of the Roe v. Wade Supreme Court decision that guaranteed abortion rights under the U.S. Constitution.

The March for Life, organized by Minnesota Citizens Concerned For Life, has been held since the first anniversary of the Roe decision. The reversal they had been fighting for came from the high court last summer in its Dobbs v. Jackson Women’s Health Organization decision.

“I had an abortion in my past and I regret it,” said Therese Douglass, who came to the rally from Plymouth. “I have two adopted daughters so I got blessed with that and I’m just here to let people know that the life inside the womb, it’s alive.”

Now, their efforts are focused on stopping DFL-led efforts to codify abortion protections into Minnesota state law. The Minnesota Senate is set to debate the Protect Reproductive Options or PRO Act this week after it was passed by the Minnesota House on Thursday.

“Respect life. That’s what our government is for,” said Ken Belchak, who traveled from Grand Rapids for the rally. “We love life and we’re very disappointed that our legislators don’t see it that way.”

A 1995 state Supreme Court ruling found the Minnesota Constitution guarantees a right to an abortion. But Democrats and advocacy groups point to the Dobbs decision as evidence that future courts in Minnesota could change the precedent.

“Abortion care is vital health care and must be available to anyone who needs it, wherever they live, whoever they are, however much they make, “ the group UnRestrict Minnesota said in a statement. “That is why the UnRestrict Minnesota coalition has fiercely advocated for the repeal of Minnesota’s onerous restrictions on abortion care, and why we are advancing legislation at the Capitol to protect and expand access.”