Vikings searching for solutions on defense after latest leak 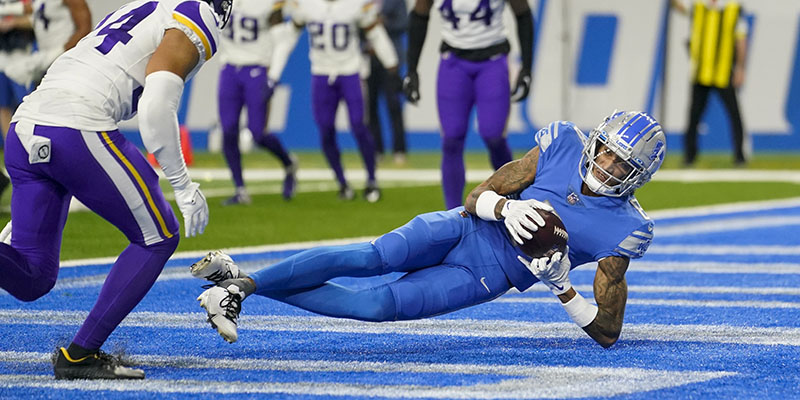 Detroit Lions' Josh Reynolds catches a touchdown pass during the second half of an NFL football game against the Minnesota Vikings Sunday, Dec. 11, 2022, in Detroit. (AP Photo/Paul Sancya)

MINNEAPOLIS — The Minnesota Vikings have found a winning formula for this season despite a vulnerable defense: producing enough well-timed sacks, stops and turnovers in scoring range to offset the concerning amount of total yards they’ve surrendered.

What if the takeaways don’t come and the pass rush isn’t there? They’re in trouble, as their 34-23 defeat in Detroit clearly and plainly stated Sunday.

The Vikings didn’t come close to sacking Jared Goff, who shredded their injury-thinned secondary. The potent Lions not only didn’t turn the ball over at all, they scored six times with only one punt over their last nine possessions.

“I think we need to take a look at what we can do to potentially help our guys be in a position to make more plays, be a little bit more aggressive, possibly,” coach Kevin O’Connell said. “Ultimately I think we need to generate more rush, however we do it, and then just try to limit explosives.”

With the Vikings (10-3) enjoying so much success in his first year, O’Connell hasn’t had much reason to criticize his team, and his confident and optimistic personality rarely moves him to do so.

His postgame assessment was a clear directive to defensive coordinator Ed Donatell, though, to make some schematic changes to a group that set a dubious franchise record with a fifth straight game allowing 400-plus yards. O’Connell said on Monday he’s not “as of right now” considering a substitute play-caller for Donatell or shuffle of any other responsibilities.

“We’ve got to go back to the drawing board and get better,” linebacker Eric Kendricks said.

The Vikings have yielded 60 plays of 20-plus yards this year, tied with the Lions for the most in the NFL, according to Sportradar data. They’ve given up 25 plays of 30-plus yards, second-most in the league. They’re also not a team under Donatell that blitzes much, sending more than four rushers on 17.3% of the passing plays against them, per Sportradar’s calculations, ranking 25th in frequency. Their quarterback pressure rate of 17.6% ranks just 27th in the NFL.

Bringing Harrison Smith back at safety will be a big help, but that’s only a start.

“Everybody’s spirits are still high,” said Josh Metellus, who filled in for Smith against Detroit. “We’ve still got faith in this group.”

Justin Jefferson racked up 223 receiving yards for the franchise regular-season record in the latest evolution of his connection with Kirk Cousins. Despite the absence of center Garrett Bradbury and left tackle Christian Darrisaw and a next-to-nonexistent rushing attack to keep the Lions defense honest, Cousins continually delivered decisive and precise throws down the field to Jefferson.

“I’m an ultra-competitor. I hate losing. I hate losing in board games, so imagine losing a football game,” said a downcast Jefferson afterward.

The run blocking was lacking against the Lions. Dalvin Cook netted only 23 yards on 15 carries, an average of 1.53 yards per rush that was the third-lowest of his career.

“We’ve got to take a look at our run game right now and make sure we’re doing the things that we can do as coaches to give our players a clear-cut plan to be able to handle the different things movement-wise that you face in a game and get our backs going again,” O’Connell said.

Over the last three seasons, only four quarterbacks have passed for 400-plus yards without an interception and lost the game, per Sportradar. Cousins joined the club by completing 31 of 41 passes for 425 yards and two touchdowns for a season-high 124.5 passer rating.

Cook has averaged fewer than 3 yards per carry in three of the last six games. He lost a critical fumbl e with 59 seconds left in the second quarter on a busted trick play from the 3 when he hesitated and was hit before he could throw to tight end Johnny Mundt.

Blake Brandel, who has started the last three games for Darrisaw, tore the MCL in his knee and will miss at least a month. Linebacker Jordan Hicks has a foot injury that forced him out in Detroit, and he’ll have a chance to play on Saturday against Indianapolis, O’Connell said. Smith (neck), Darrisaw (concussion) and Bradbury (back) are all on track to be cleared to play the Colts.

1,500 —That’s how many yards receiving Jefferson has this season. He needs 465 yards in the last four games to break Calvin Johnson’s NFL single-season record set in 16 games in 2012.

The Vikings get their next two games at home against struggling teams, with the Colts (4-8-1) followed by the New York Giants (7-5-1). Neither team has won since Nov. 13. The Vikings will win the NFC North with one more win or one more Lions loss. They’re one game ahead of San Francisco for the No. 2 seed in the NFC.