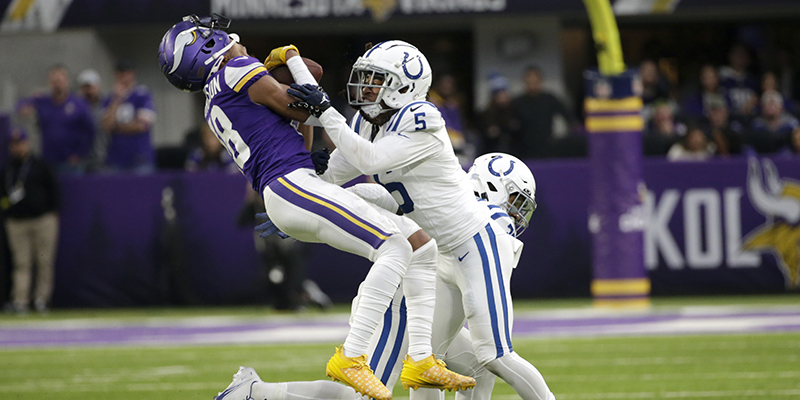 EAGAN, Minn. (AP) — For all the superb skills Justin Jefferson has as the leading receiver in the NFL, from route-running savvy to quick-twitch elusiveness to vertical jump to just pure speed, his ability to simply hang onto the ball for the Minnesota Vikings might be his best attribute of all.

The sure hands are one thing, but his unflinching courage and natural strength to grab a ball in tight coverage and secure it during a jarring hit is a regular sight to behold.

“They’re just difficult to hear footsteps and not shrink back, drop the ball, not hold on,” his ever-appreciative quarterback Kirk Cousins said. “His ability to consistently hold on in traffic is just an elite trait. I don’t know how you coach it, but you certainly have it and it gives me a lot of gratitude when I see him do that and the catches he makes.”

The Vikings have faced five of the league’s top 12 defenses in terms of total yards allowed over their past six games, and during this stretch Jefferson has seemingly had to pay an even steeper physical price than usual to come down with the ball.

Indianapolis cornerback Stephon Gilmore was the latest defender penalized against Jefferson, an unnecessary roughness call for hitting him with his helmet in the facemask in the fourth quarter on Saturday in Minnesota’s 39-36 victory.

The Vikings completed the biggest comeback in NFL history and clinched the NFC North division title in the process.

“Clearly, there’s an emphasis on the teams we’re playing,” coach Kevin O’Connell said. “Some of those hits, they don’t just seem to be by accident at times.”

Jefferson was forced briefly out of the game for a concussion check. He ripped off his helmet after that play in anger over the danger of the collision.

“I didn’t really feel it was a clean hit, him lifting up and going and tackling me high,” Jefferson said.

Growing up with two older brothers, both of whom played before him at LSU, Jefferson developed his toughness at an early age.

“It’s just like Michael Jordan and the Detroit Pistons. They try to take out the best player and try to put as much physical abuse as they can on him,” Jefferson said, referencing an era in the NBA a decade before he was born. “I feel like it’s happening more and more every game, but it is what it is when you’re this type of player.”

Cousins holds some of the cards in the quest to keep the team’s best player safe.

“I’ll let him know when it’s my fault and I could’ve protected him: ‘My bad,'” Cousins said. “There are other times where I’ll say, ‘That’s life in the big city, bud. You know the safety is coming, and I can only hold him for so long. You’ve got to make the play,'” Cousins said.

Jefferson has been making the majority of them. His 111 receptions and 1,623 yards lead the league, and he needs 342 yards to break Calvin Johnson’s single-season receiving record. That was set with Detroit in 16 games in 2012.

The apples-to-apples mark would require an average of 171 yards over the next two games, a total Jefferson has topped three times this season. Getting there in a three-week span is highly attainable, though Jefferson has said he wouldn’t consider the 17-game record the same.

“It’s just going to be exciting that I even got close to it,” Jefferson said before practice on Wednesday in preparation for the upcoming game against the

New York Giants. “Of course I would want to get to it, but if we make it to the big goal in the end, it doesn’t matter.”