US blizzard expected to impact millions in Rockies, Midwest 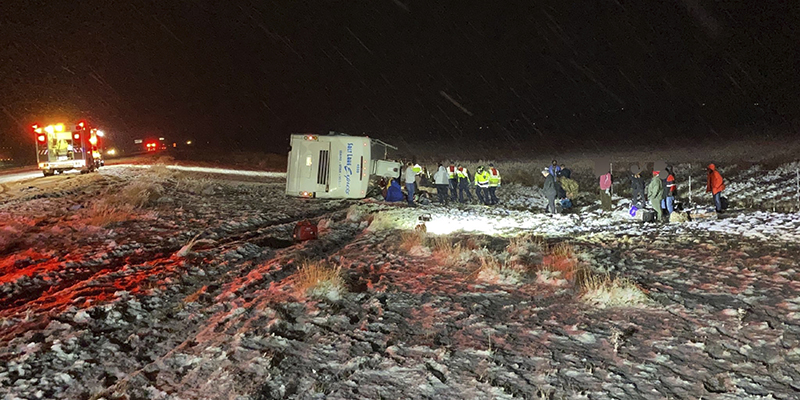 This photo provided by the Utah Department of Public Safety shows an overturned Salt Lake express bus that had passengers when it overturned along eastbound on I-84 approximately 5 to 7 miles west of Tremonton, Utah, Monday, Dec. 12, 2022. The tour bus heading from Boise, Idaho to Salt Lake City, Utah crashed Monday morning, flipping onto its side and injuring dozens of passengers. Utah Highway Patrol said the majority of passengers aboard the bus sustained minor injuries from the crash. (Utah Highway Patrol/Utah Department of Public Safety via AP)

SIOUX FALLS, S.D. — A massive winter storm blew toward the center of the U.S. on Monday, threatening millions of people with heavy snow, freezing rain and flooding.

The National Weather Service warned that there would be “numerous, widespread, and impactful weather hazards in the heart of the country this week.”

Across the Rockies and into the northern Plains and parts of the Midwest, people were warned to prepare for blizzard-like conditions. Those farther south in Texas and Louisiana could get heavy rains with flash flooding, hail and tornadoes by Tuesday. The storm will continue southeast into Florida later in the week, forecasters said.

“It will be a busy week while this system moves across the country,” said Marc Chenard, a meteorologist at the National Weather Service’s headquarters in College Park, Maryland.

Officials in western South Dakota told residents to brace for 6 inches (15 centimeters) or more of snow: “Get your shovels handy, get your groceries, and check other needed supplies. The roads will be hard to travel.”

A swath of country stretching from Montana into western Nebraska and Colorado was under blizzard warnings Monday, and the National Weather Service said that as much as 2 feet (61 centimeters) of snow was possible in some areas of western South Dakota and northwestern Nebraska.

Meanwhile, ice and sleet were expected in the eastern Great Plains.

National Weather Service warned that up to about half an inch (2.5 centimeters) of ice could form and winds could gust up to 45 miles per hour (72 kilometers per hour) in parts of Iowa, Minnesota and South Dakota. Power outages, tree damage, falling branches and hazardous travel conditions all threatened the region.

“This is a ‘we are not kidding’ kind of storm,” the South Dakota Department of Public Safety said in a tweet urging people to stock up on essentials, then stay home once the storm hits.

Thousands of students from Native American communities across Wyoming, Nebraska and the Dakotas were traveling to Rapid City, South Dakota, for this week’s Lakota Nation Invitational, a high school athletic event. Brian Brewer, one of the organizers, said he had urged schools and participants to travel early.

“We told them with this storm coming — if you leave tomorrow, there’s a good chance you might not make it,” he said Monday.

In northern Utah, a tour bus crashed Monday morning as snow and frigid temperatures blanketed the region. The bus flipped onto its side in Tremonton after the driver lost control while switching lanes, the Highway Patrol said in a statement. The Highway Patrol said 23 passengers were injured, including some seriously.

The weather is part of the same system that dumped heavy snow in the Sierra Nevada over the weekend.

With winter still more than a week away, it was the latest fall storm to bring significant precipitation to California, which is dealing with the impacts of years of drought that have spurred calls for water conservation.

The Sierra snowpack, which on average is at its peak on April 1, is normally a significant source of water when it melts in the spring. Throughout the drought experts have cautioned about optimism over early season storms as climate change makes what were once average conditions rare.

Last year, a powerful atmospheric river dumped huge amounts of rain on California in October and a wet stretch in December left parts of the Sierra Nevada buried in snow. Then the state experienced its driest January through April on record.