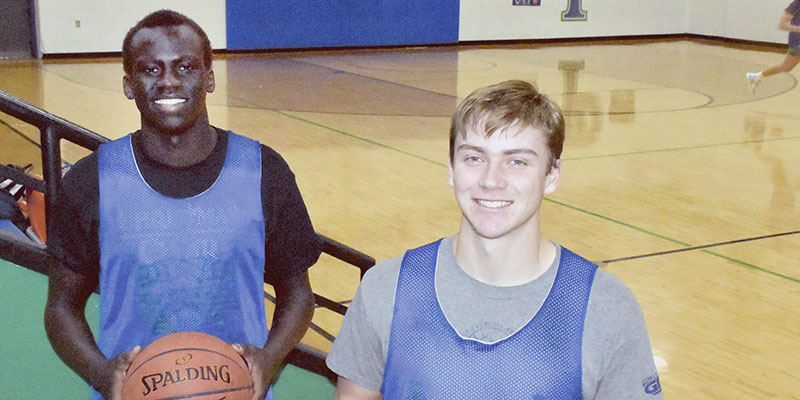 Buay Koak, left, and Jake Truckenmiller, right, have teamed up to lead Lyle-Pacelli off to a hot start this winter. Both players took different paths to leadership roles with the Athletics. Rocky Hulne/sports@austindailyerherald.com

LYLE — Lyle-Pacelli seniors Buay Koak and Jake Truckenmiller took different paths to basketball, but once they found each other, they forged a connection that now has the Athletics thinking big things.

Jake, who attends Lyle High School, has been around basketball as long as he can remember as his dad Carl, a former Lyle player himself, is the current head coach and his older sisters both played basketball. Jake spent many of his youthful nights watching the LP girls practice and he was playing on teams by the time he was in second grade.

“I always came to practice with my dad,” said Jake. “It was a good atmosphere being around the girls and watching them win all of those games.”

Koak, who attends Pacelli High School, didn’t start playing organized basketball until he was in sixth grade. He had played casually with friends, but he didn’t feel a strong desire to play until he was a little bit older.

“I wanted to give it a try. I started off real bad, but I kept going to the Y and I started to see improvement,” Koak said. “My teammates at Lyle-Pacelli and the Austin High School guys have helped me out a lot. I’ve played with both of them and those guys are like my brothers. I’ve actually learned how to play real basketball instead of Y ball.”

Koak has thrived with the Athletics as he has played all five positions on the court. He can go inside for a jam, grab a rebound in traffic, or handle the ball outside and knock down jump shots.

Jake said he started to see Koak’s potential after one year of playing with him.

“I remember he did the jump ball for us because he was tall (as a sixth grader), but he had no jump shot or anything like that,” Jake said. “By the time he was a seventh grader, he got real good and he was hitting mid rangers. That’s when I started to notice that he could be really good.”

Pacelli and Lyle may have different high schools, but their sports programs have bonded the communities together over the years. Koak said he felt welcomed with L-P and he’s grown close to all of his teammates in his six years on the court.

Jake certainly made Koak’s transition easier as he is a knock down shooter, he can control possession on offense and defend the ball on defense.

“Jake has helped us out a lot,” Koak said. “When the ball’s in his hands I’m not worried. He’s going to bring the ball down and get us in our offense.”

Jake said that Lyle and Pacelli have become a large community over the past few years as the schools have blended together for Homecoming events, game nights and plenty of practices.

“We’re obviously different schools, but it seems like we’re going to the same school,” Jake said. “Everyone knows everyone and we’re all in the same sports.”

Carl began coaching the current senior class when they were in second grade and he started as head coach of the varsity team last year. He was a little shocked to see Koak show up as a sixth grader, but Carl has enjoyed watching Koak develop over the years.

“I couldn’t believe Buay was in Pacelli that whole time. I told him I wished I would’ve known and I would’ve gotten him two years earlier,” Carl said. “He said he wasn’t sure if he even would’ve played, because he didn’t like basketball then. He was super raw. You could tell he played at the Y, but never structured basketball. Once he figured out the structure, he took off.”

To keep players accustomed to each other, Carl had the team playing together in the spring and summer from the time they were sixth graders.

“It was a big deal that we had enough kids to play as a class in tournaments. That was a little bit different for Lyle-Pacelli, because are teams are usually smaller,” Carl said. “You have to do stuff in the summer, because if you don’t bring them together in the summer, they won’t get together.”

Carl was an assistant coach on the L-P girls team that featured his daughters Madison and Kendal, who was part of the state championship team in 2018. He’s relished his time on the sidelines as a leader and he’s embraced the quality time he’s gotten to have with his family.

“It is a lot of emotion. It’s hard for me to talk about Jake, because I sometimes feel like because he’s my son, no one is going to believe what I’m saying is true because he’s my son. Jake and Buay are both great kids, who work super hard all of the time,” Carl said. “Being able to coach my daughters and Jake has been awesome to be able to spend time with them. Being a Lyle grad, I never thought I would be the boys head coach, but I did the time as a junior high and JV coach to get here.”

L-P won its first five games by at least 24 points each, but the Athletics have some big tests looming as they will play Cannon Falls and Hayfield in Hayfield on Dec. 28 and Dec. 29 and they will play at Spring Grove on Jan. 3.