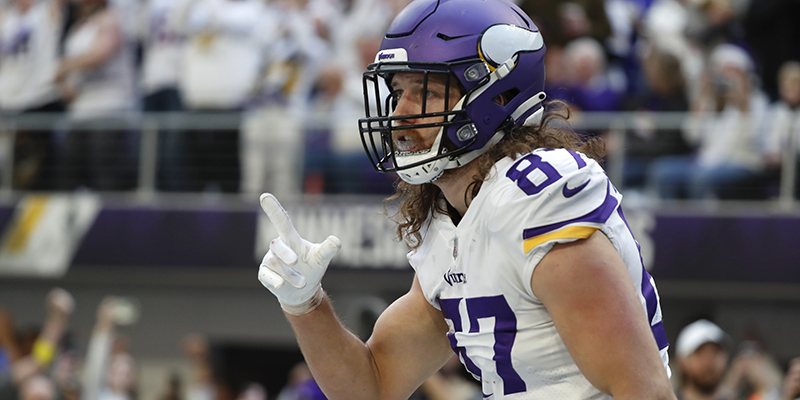 Smith got hurt two days before the trade deadline, but Minnesota knew the importance of the tight end spot and identified Hockenson’s availability and potential to fill a pivotal role.

Hockenson has proven to be the perfect fit, never more than this past Sunday, when he had a career game as the Vikings beat the New York Giants.

“There’s a lot of moving parts and a lot of responsibility on a guy like T.J. to be ready to be in a lot of different spots and have an impact, and he’s been able to do that.”

Hockenson has been the Vikings’ second-most targeted player — behind only star receiver Justin Jefferson — since his arrival. He has 52 catches on 73 targets for 444 yards and three touchdowns in eight games with the Vikings.

He had a career-high 13 catches, the most by a tight end in the NFL this season and a Vikings record for a tight end, in Sunday’s win. His 109 receiving yards were the third-most in a game in his career, and he tied a career high with two touchdowns.

“It’s been incredible,” Hockenson said. “I really couldn’t have picked a better place, and I really do appreciate and (am) very blessed to be here.”

Hockenson was a big contributor from his first game in a Vikings uniform. He had nine catches for 70 yards in a win against Washington five days after the trade.

“I was pretty comfortable with him from day one, having seen what he did in his pro career in Detroit,” quarterback Kirk Cousins said. “And then, right away with the confidence he gave me knowing that he was familiar with what we were asking him to do.”

Several teammates and coaches have spoken highly of Hockenson’s ability to adapt quickly. He has picked up the playbook and developed a rapport with Cousins.

Cousins has been willing to throw into tight windows to target Hockenson, including his second touchdown on Sunday.

Detroit had previously picked up Hockenson’s fifth-year contract option, so Hockenson is signed through next season. Minnesota gave up a second-round pick in 2023 and a 2024 third-rounder for Hockenson. The Vikings also received a 2023 fourth-round pick and a conditional 2024 fourth-rounder.

“I give (general manager Kwesi Adofo-Mensah) and his staff a ton of credit for identifying a player that can seamlessly fit in with his skillset based upon how we play and how we would try to use the player,” O’Connell said. “We had a lot of dialogue about that before the trade and then getting him here and learning more and more about him, learning the type of person, the makeup.”

O’Connell and the playoff-bound Vikings (12-3) might soon have two pass-receiving options at tight end. Smith was designated to return from injured reserve on Wednesday, opening his 21-day practice window.

The injury-plagued Smith, who’s played just 36 games since being drafted in the second round in 2019, was injured in Week 8 when a teammate fell onto the back of Smith’s leg. Smith, who also had thumb surgery in the preseason and is a free agent at the end of the season, had 22 catches for 168 yards and two touchdowns in seven games.

“I think it’s great for our team, the depth we have at that position with Irv coming back, and T.J.’s really emerging since we got him,” O’Connell said. “It’ll be huge for us.”