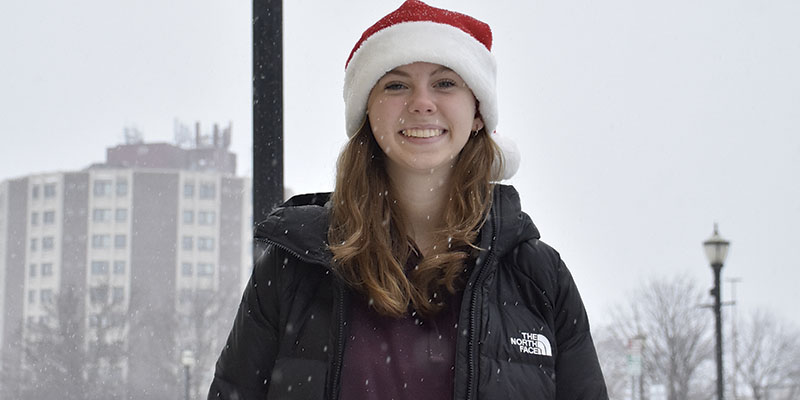 Austin sophomore Sydney Tobak paid her own Christmas forward this year by bringing gifts to those in need. Rocky Hulne/sports@austindailyherald.com

Austin sophomore Sydney Tobak is not one to seek attention, but she’d like to spread the spirit of gifting.

It all started when Tobak was sitting in Language Arts class and hearing her classmates talking about what they wanted for Christmas. That’s when the light bulb went off in Tobak’s head and she made up her mind that she was going to give her Christmas gifts to someone in need.

“I started thinking about how I didn’t want anything and other kids needed gifts more than I did,” Tobak said. “I’ve had a good Christmas every year and I wanted to give that to someone else.”

Tobak gave her mom an immediate text that read “I know what I want for Christmas…” Tobak’s mother braced herself for what was coming next and was pleasantly surprised when Tobak said that she wanted to take the money that her parents usually spend on her for Christmas and gift it to other kids in the area.

With the help of her dad, Tobak chose three charities — a Hormel program that brings gifts to Gerard students, the Salvation Army, and Toys for Tots.

Tobak picked out the gifts during a day of shopping in Rochester with her family. The day included a lot of “thank you’s” from Tobak to her parents and there was also a successful quest for a specific journal on one of the wish lists, which are anonymous.

“I learned that family is really important,” Tobak said. “It’s more important than gifts. This brought the whole family together. Giving to people fills your heart and  giving feels better than receiving.”

Nicole Dudycha, Marketing and Communications coordinator at Nexus-Gerard Family Healing said that all of the students at Gerard have been able to have their Christmas wishes fulfilled thanks to the program that Tobak donated to. In the program, Hormel Foods employees adopt a wish list for Gerard kids and purchase the items requested.

Along with gifts, the employees sometimes sponsor trips to Valley Fair or trampoline parks.

The program began just two years ago and has been a big hit.

“We were never able to do that much for them before, but now every kid gets what they wanted,” Dudycha said. “It’s amazing. Every request we send them, there is someone who takes it. It is unreal.”

Tobak was hesitant to tell her story about giving because she didn’t want to gain notoriety or attention. She simply wants to spread the joy of giving.

She encourages anyone in Austin with the means to do so to give to the Salvation Army.