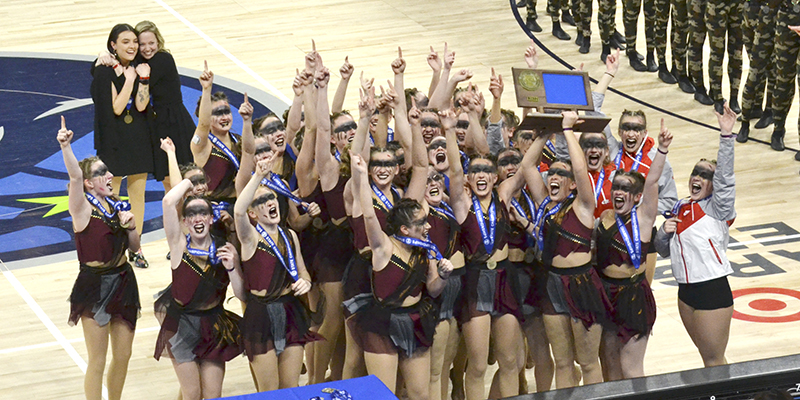 The Austin Packer Dance team had a highlight year in 2022, claiming the school’s first state title in 35 years at the Minnesota State Dance Competition, ranking as the top sports story of the year.

APDT has always found ways to stay active in the community, whether it be for drive-up dances during the COVID-19 pandemic, or helping out around town. This was another way for the team to bring positivity to Austin.

Coached by Kayla Sellers, a 2007 AHS grad who was also on the dance team, APDT has competed in 20 straight state meets.

The last Austin team to win a state title was the Packer softball team in 1987.

Austin head coach Kris Fadness had quite the final act for the Packers as he coached the Packers to a state tournament in his final run before resigning at the end of the season.

The Packers had an up and down regular season and finished with a record of 17-14, but they put up a good fight against Princeton in a 73-63 loss in the state quarterfinals.

Fadness has won over 400 games at AHS and has over 500 wins in total. He guided the Packers to seven state tournaments — all coming in his last decade as head coach.

Twinning til the end

Austin grads Hope and Emma Dudycha wrapped up their time as Packers as two of the most accomplished players in program history.

The pair, who were brought up to varsity as seventh graders, played in three state tournaments for the Packers and helped Austin win the consolation bracket in 2022.

Austin’s Emma Dudycha works against Stewartville’s Haylie Strum during the first half of the Section 1AAA championship . Eric Johnson/photodesk@austindailyherald.com

Both players are now at Division II University of Minnesota Crookston.

The Austin boys soccer team won its fifth section championship of the last six years, but it sure wasn’t easy or expected.

Austin, which was shorthanded on players for much of the season, won back-to-back shootouts over Faribault and Winona to get to state, but it lost to Hill-Murray 4-0 in the Class AA quarterfinals.

Austin started the season with a record of 3-9-1 overall and it finished with a mark of 8-11-1 overall.

Zander Jacobson made a free throw to put Hayfield up 45-44 and the Vikings made six straight free throws down the stretch to clinch the tile.

Isaac Matti finished with 27 points in the win for the Vikings, who won their first state title in 2021.

Lyle-Pacelli’s Hunter Bauer (1) tries to haul in a pass in the end zone against the defense of Grand Meadow’s Connor Munson this past season. L-P will not have a varsity football next season for the next two seasons. Herald file photo

The Lyle-Pacelli football team put together its best season in at least a decade when it finished 4-5 overall this past fall.

The Athletics were led by a big senior class, including quarterback Jake Truckenmiller and senior running back Trey Anderson.

Unfortunately for L-P, its numbers are dipping and the program has announced that it will not field a varsity team for the next two seasons. The years off will allow younger players to play at their own level as the Athletics will look to be competitive when they return to the Friday night lights in three years. 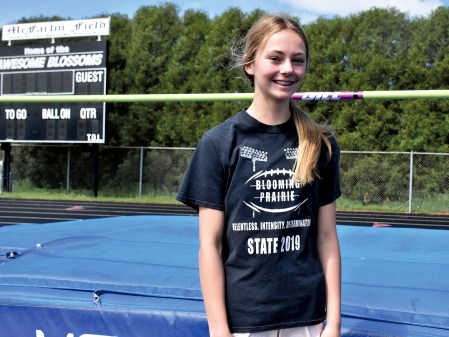 Blooming Prairie sophomore Annaka Forsberg is set to compete in the high jump at the Minnesota Class A state track and field meet this past spring. Rocky Hulne/sports@austindailyherald.com

Blooming Prairie’s Annaka Forsberg, who is now a junior, won a state title in high jump at the Minnesota Class A state meet this past spring.

Forsberg, who had taken fourth at state in 2021, cleared a height of 5 feet, six inches to win the Class A title. 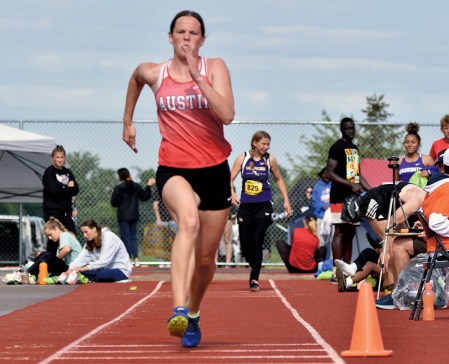 No matter the sport, Austin senior Olivia Walsh has a pretty good chance to get to state.

In the last year alone, Walsh was a starter with the Packer girls basketball team that won the Class AAA consolation state title, she competed in the triple jump and high jump at the Minnesota Class AA state track and field meet and swam in the Minnesota Class A meet this past fall.

Walsh, who has committed to play basketball at the University of Minnesota-Crookston also competed in the state swimming meet as a junior — giving her a total of four career state tournament appearances as an athlete within a 15 month stretch. 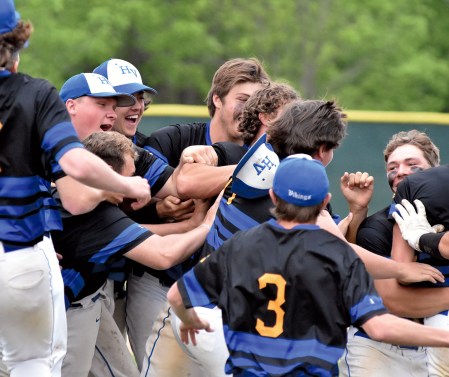 The Hayfield baseball team celebrates its win over Southland. The Vikings headed back to the state tournament after winning the Class A title last year. Rocky Hulne/sports@austindailyherald.com

Hayfield graduate Easton Fritcher made school history when he became the first Viking baseball player to land a Division I commitment.

Fritcher committed to the University of Minnesota baseball team and then went on to help the Viking basketball team win a state title before helping the Hayfield baseball team take second in state.

Fritcher was a pitcher, outfielder and shortstop for the Vikings and was a fixture in the lead-off spot. He is currently listed as an outfielder and pitcher on the Golden Gophers official roster.

Members of the Riverland Community College men’s basketball team were given gift packages by supporters as they left for the NJCAA Division III National Tournament last year. The team begins play on Thursday at Rock Valley College in Rockford, Illinois. Eric Johnson/photodesk@austindailyherald.com

The Riverland Community College men’s basketball team enjoyed its best season in program history as the Blue Devils finished in fifth place in the NJCAA Division III Tournament with a record of 32-2 overall.

RCC went undefeated in the conference for the first time ever and the Blue Devils earned their first ever No. 1 ranking.

RCC is coached by former Blue Devil in Derek Hahn, who is in his 10th year at the helm.