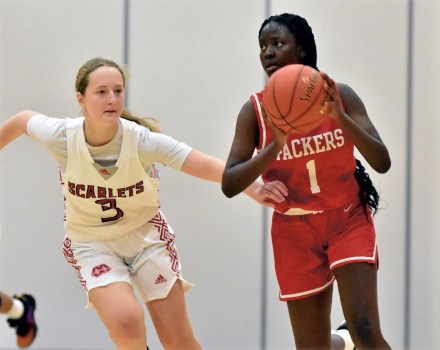 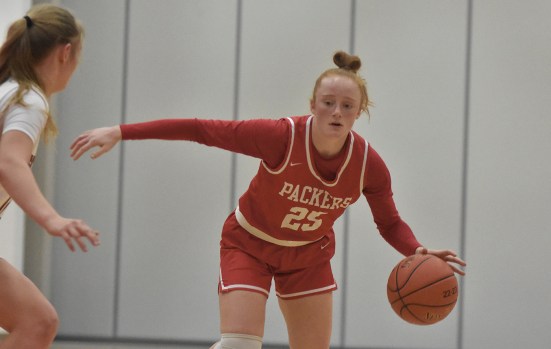 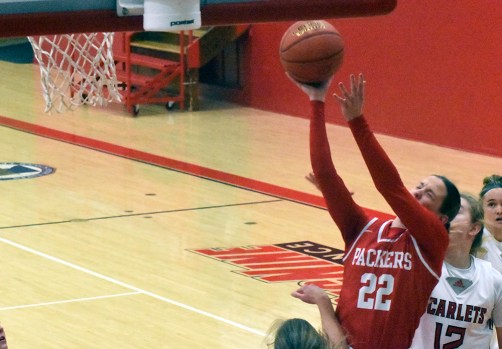 Olivia Walsh fights up a shot against a crowd of Mankato West defenders. Rocky Hulne/sports@austindailyherald.com 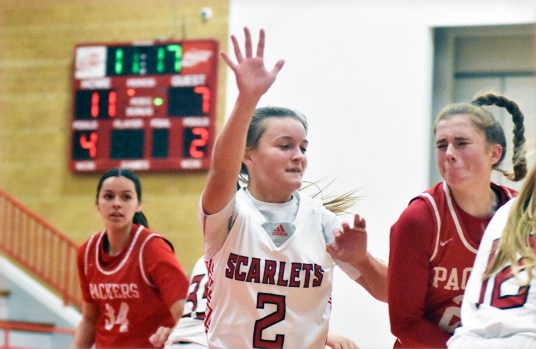 The Austin girls basketball team has a lot of young players with big potential, but the team is leaning heavily on its two senior leaders early on in the year.

Olivia Walsh and Cassidy Shute both showed their younger counterparts what it takes to win in the Big Nine as they each made some crucial plays in a 60-52 win over Mankato West in Ove Berven Gym Tuesday night.

Walsh had 18 points, eight rebounds and three steals for Austin. She was banged up on a collision with six minutes left in the game, but she came in and played strong defense down the stretch.

Walsh and Shute are both three-sport athletes who rarely take a break and they’re hoping their work ethic rubs off on their teammates.

“There’s a lot of leading by example in practice,” Shute said. “We kind of coach them while we’re on the court too and they follow us in games and in practice. We set the tone and when we’re aggressive, they get aggressive too.”

Walsh was swimming in the Class A state swimming and diving meet just three weeks ago and she also competed in the state track and field meet last summer. Now she’s already in the midst of another marathon basketball season.

“It’s been rough transitioning in with no breaks. I’m just trying to be there for the team,” Walsh said. “We have a really young team with a lot of growing to do, but we’re getting there. We want to leave a legacy behind. My little sister (Addison) and some of her best friends are on the team. We want to leave them a good example.”

Austin head coach Eric Zoske said it is crucial to have leaders like Walsh and Shute and both of them have answered the call.

“Any of that experience is so important for us, especially tonight against a tough team in West,” Zoske said. “Cassidy came through in the second half for us and Olivia bounced back from a little back injury. It’s a great time for them to lead and show what it means to want to win.”

The Packers opened the game on a 9-4 run and they took a 22-17 lead when eighth grader Quinn Osgood and sophomore Ajiem Agwa, who had 14 points, nine rebounds and three steals, each converted back-to-back steals for lay-ups.

“Marie Tolbert gives us so many valuable minutes and she plays fantastic defense, and Quinn Osgood came off the bench and made some big plays,” Zoske said. “That’s pretty prime time for an eighth grader.”

West (0-2 overall) bounced back to take a 38-34 lead early in the second half, but the Packers scored six straight points and took the lead for good when Walsh scored on a post-up move.