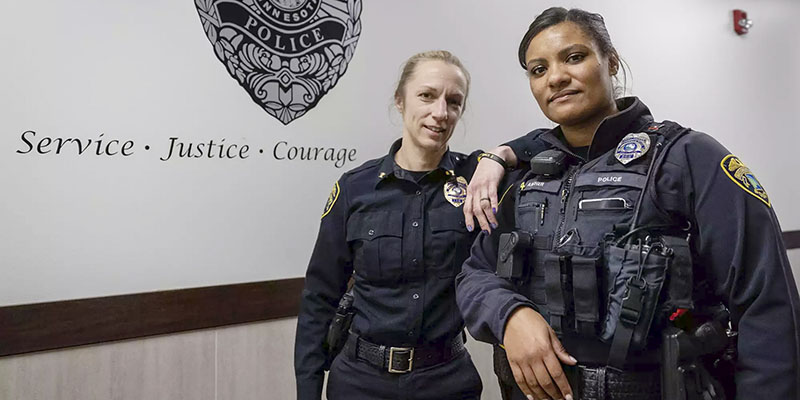 Investigator Toni Weinbeck (left) and officer Alyssa Archer pose for a photo at the Brooklyn Park Police Department on Tuesday. Their department is trying to reach their goal of having a staff of 30 percent women in the next seven years. Ben Hovland/MPR News

Brooklyn Park police officer Alyssa Archer has been a patrol officer at the department for about seven years. Becoming an officer was Archer’s lifelong goal.

“Kids want to be a teacher, they want to be a veterinarian, and that changes throughout the stages of their life. That never wavered for me. I always and consistently wanted to be the police,” Archer said.

Now, she’s one of five officers in the department who are women.

A low number compared to the about 40 male officers on staff. It’s partly why the department signed the 30×30 pledge — a national initiative with the goal of turning police departments to 30 percent women by the year 2030.

It seems like a long way from now, and with police officers leaving the industry in droves and recruitment already a challenge, focusing on women makes the task trickier.

Patrol Inspector Toni Weinbeck can attest to that. She’s been with the Brooklyn Park police department for 20 years and says there are multiple reasons women might not want to get into law enforcement.

“You think of women being raised from childhood, they’re taught to smile and to be happy to always get along with everybody. So getting into confrontations is difficult, getting into physical fights is difficult for women to picture themselves in,” Weinbeck said.

She says as a result, the recruitment pool is reduced during a time the profession needs women more than ever. The research backs that up.

According to the U.S. Department of Justice, women are less likely than male officers to use force and excessive force. The DOJ also says women officers are named in fewer complaints — saving departments from potentially costly lawsuits.

There are notable exceptions —like former Brooklyn Center officer Kim Potter who was convicted of manslaughter for the shooting death of Daunte Wright. Potter said she meant to tase Wright during a 2021 traffic stop, but mistakenly shot him. The city also paid more than $3 million to Wright’s family to settle a lawsuit.

Data from the Brooklyn Park police department show since 2015, women officers have filed use of force reports at a lower rate than their male counterparts. Weinbeck says that percentage also changes depending on the number of women on patrol and the number of incidents per year.

“[In] 2015 we had 16 women officers at that point,” she said. “Our use of force rate was eight percent for women then. But then we have other years where it’s zero where women didn’t use any force.”

Weinbeck says it’s important to keep in mind the difference between use of force and excessive use of force. Use of force can be anything from striking, to taking somebody down, to using tasers and pepper spray.

She says excessive use of force is measured in other ways. Weinbeck says sometimes the public has a different perspective on what is excessive.

For instance, someone might see her putting a compliant person in handcuffs as using too much force.

Professor James Densley heads the School of Law Enforcement and Criminal Justice at Metro State University. He says it’s true that women officers use less force than officers who are men. And Densley says it may also be that people have different expectations of women officers.

Both Weinbeck and Archer say their empathetic nature and lived experiences as women have made positive differences on calls they’ve responded to.

Archer, who is Black, says before she became an officer she was pulled over for driving without insurance. She understands how racism and implicit bias can impact the interactions between communities of color and police.

“If a female is a victim of a crime that is perpetuated by a male, they might feel that a male responder might judge them for reporting such, or they may feel that a male might think they’re overexaggerating or think that they’re mad and just trying to get him in trouble,” she said.

Weinbeck said hiring more women officers is a step in the right direction to police reform, but lasting change will take more than that.

“We need to set a standard of the work that we do as doing it better moving forward, and that we are providing the best service for everybody in our community,” said Weinbeck.

Weinbeck and Archer say hiring more women on the police force could change departments’ culture. They say not only will increasing the number of female recruits help build more trust in the communities they serve and de-escalate potentially volatile confrontations, but it will also allow departments to reconsider what policing means.

The department is working to reach its 30 percent goal in the next seven years through various recruitment efforts.

Those efforts include career fairs at colleges and universities, and the department’s cadet and skills program, which introduces young women to the field.