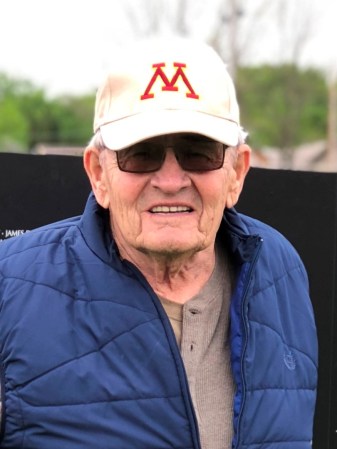 Oscar Charles was born September 24, 1936 in Greene, Iowa to Maynard and Carma (Fahr) Huff. As a child, Oscar’s family moved to Lyle, Minnesota. Oscar graduated with the Class of 1954 from Lyle High School and went on to earn his Associate of Arts degree from Austin Community College.

Following graduation from college, Oscar began his long career with the Minneapolis Star Tribune. He was united in marriage to Carol Jean Bell on September 1, 1956 at Our Saviors Lutheran Church in Lyle. Oscar’s career was put on hold when he was drafted into the United States Army in November of 1959. He served during the Korean War until his honorable discharge in February of 1962. Oscar returned home and continued his career with the Star Tribune and rose to the position of District Sales Supervisor before retiring in 1996. Oscar took a “retirement job” with Holiday Cars in Austin that he absolutely loved. Finally at age 75, Oscar officially retired.

Oscar loved people and had a nickname for everyone. He loved sports and played basketball both in high school and college. Oscar enjoyed fishing and hunting, and following the Twins, Vikings and Gophers. He was an avid golfer, and was proud of his two hole-in-ones. Oscar was a member of the Austin Post #91 American Legion, and Our Savior’s Lutheran Church in Austin.

He was preceded in death by his parents; 3 brothers Roger, Wendy and Ward; sister Charlene, and a sister at infancy; father-in-law and mother-in-law Vern and Ethel (Nelson) Bell; sisters-in-law Marjorie and Jane.

Memorial services will be held at 1:30 p.m. on Friday, December 30, 2022 at Clasen-Jordan Mortuary with Reverend Mark Van House officiating. Military honors by Austin Post #91 American Legion and Olaf B. Damm Post #1216 VFW. Private family interment will follow at Grandview Cemetery. Visitation will be held from 12:00 noon – 1:30pm prior to the service on Friday afternoon at Clasen-Jordan Mortuary.