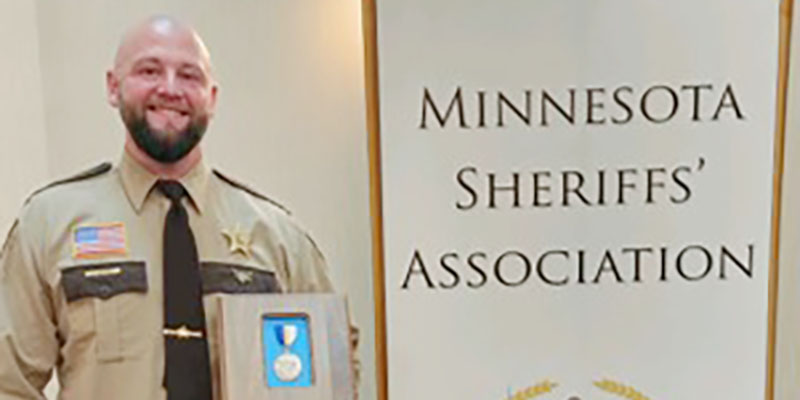 Mower County Sherriff’s Office’s Sgt. Thomas Brogan was recently honored by the Minnesota Sheriffs’ Association for his heroics during the night of the Taopi tornado. Photo provided

Sergeant Thomas Brogan was presented with the Medal of Valor for his heroic life saving efforts on the night of the April 12 tornado that devastated Taopi.

Brogan was also honored in July during a Mower County Board of Commissioners meeting, along with other members of the Sheriff’s Office, dispatch and Mower County Public Works. 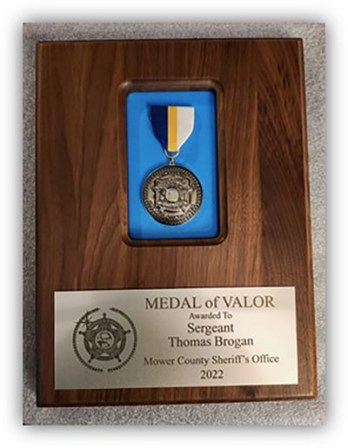 Picture of the Medal of Valor given to Sgt. Thomas Brogan. Photo provided

Brogan, along with Gary Kasel, were first on the scene moments after the storm struck to rescue Thomas Kasel and Jewel Andree from their ruined home.

“It could have been a much different outcome if everything hadn’t fallen into line,” said Sheriff Steve Sandvik during the July ceremony. “I can’t say enough how impressed I am for your heroism.”

Andree and Thomas were at home when the storm struck; it lifted and pushed the home several feet off its foundation.

Both Andree and Thomas became trapped in the basement by damage caused to the structure.

Brogan was the first deputy to enter the town, having just been outside of Adams when the first calls started coming in. A video shown by Sandvik during the meeting and taken from Brogan’s dash cam, showed the deputy pulling into Taopi with wind-driven rains still pelting the area.

Eventually, the video showed Brogan’s light coming to rest on the structure. Moments later Gary, who is Thomas’ brother, arrived on the scene and the two of them went on to pull both people from the home.

“They entered the basement of a house that literally could have crumbled in,” Sandvik said. “The two of them were able to extradite Thomas and Jewel. Thankfully both are here today.”

According to Monday’s release from Mower County, the Medal of Valor was presented to Brogan because distinguished himself by an act of personal bravery or self-sacrifice and extraordinary merit.