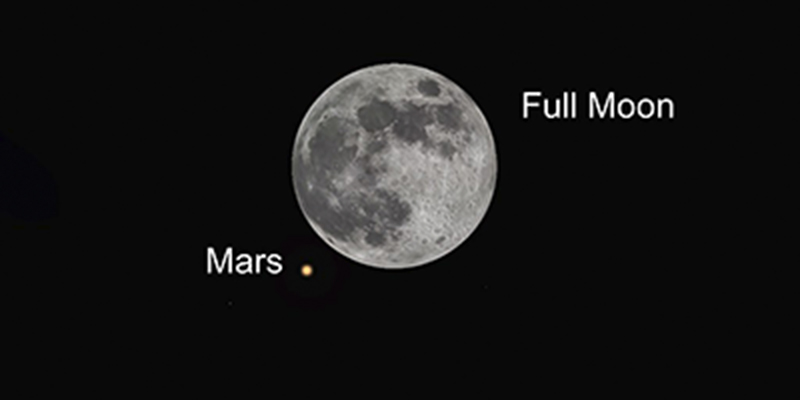 On the night of Dec. 7-8, Earth finally catches up to Mars in the orbital race. Mars will then be opposite the sun in the sky and so up all night — not to mention gloriously bright.

But despite this being its big night, Mars gets upstaged by December’s full moon. On the evening of the 7th, the moon occults — that is, passes in front of — Mars. The exact time of Mars’ disappearance varies with location, but it will happen near 9 p.m. To watch this spectacle, grab your binoculars, get outside early, and keep an eye on the moon as it closes in on Mars. The red planet will reappear on the other side of the moon approximately an hour after disappearing.

Saturn is edging toward the western horizon, with brilliant Jupiter not far behind. A waxing moon visits Saturn on the 26th, Jupiter the 28th and 29th. 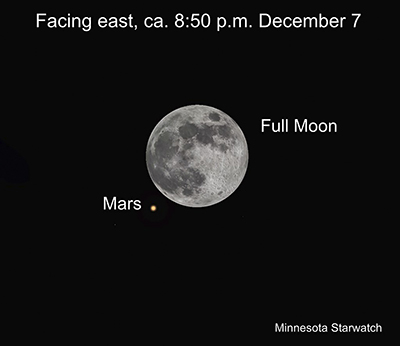 Mercury and Venus pop up into the sunset glow in mid-month. However, Mercury may be lost in the glare and Venus could be hard to find until late in the month. The best day to look is the 24th, when a young crescent moon shines to the left of the planets. Mercury soon falls out of the sky, but Venus remains an “evening star” until well into next summer.

The bright winter stars and constellations were assembled in the east by about 10 p.m. on the 1st, then earlier each night. Mars sails high above Betelgeuse, the gigantic red star at Orion’s right shoulder. See if you can make out the reddish colors of these two beacons. Compare them to the brilliant white of Sirius, the lowest of the iconic winter stars.

The winter solstice arrives at 3:48 p.m. on the 21st. At that moment the sun reaches a point above the Tropic of Capricorn and begins its journey back north.