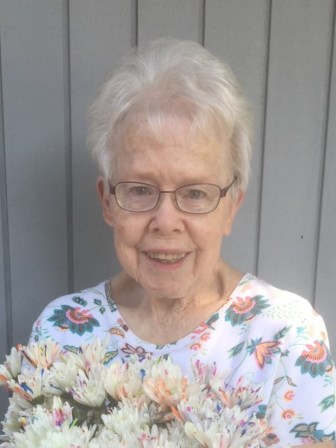 Mary Finbraaten passed away on September 10, 2022, at the age of 90 surrounded by her loved ones. Mary was born August 30, 1932, in Oslo, Minnesota to Mable and Norman Scharberg. She joined her brother Robert and sister Yvonne on the farm, and the following year her sister Pauline was born.

Mary grew up on the Oslo farm and graduated from Hayfield High School in 1950. She enjoyed telling us how she went to a country schoolhouse and that she played the tuba in her high school band. Extremely proud of her Oslo connection, Mary would correct us if we said she was from Hayfield. Mary continued her education at Fairview Hospital and became a nurse in 1954. She loved her time as a nurse. Frequently, Mary would share stories of her patients and colleagues when at Fairview and the VA hospital. Initially, she had been a camp nurse but when asked to teach swimming lessons, she left that job to go to the VA hospital since she did not know how to swim. She also spent time as a Public Health nurse in Mower County. After moving to the farm and starting her own family, Mary gave up nursing. She would tell us that she moved from nursing to becoming a veterinary technician.

Mary met Robert (Bob, Butch) Finbraaten in 1957 when they were set up on a blind date by Mary’s cousin David Gilderhus. Mary and Bob went to a movie on that first date and soon after it became apparent that this was a good match and they married on March 8th, 1959. They bought the Finbraaten family farm north of Adams and raised their 3 children there along with cows, pigs, chickens, peacocks, dogs, and multiple barn cats. They were so glad to have their son Mike and his wife Sue take over the farm operations in 1994 and moved into Adams where they lived on the corner of Water Street. Mary loved her time on the farm, but also loved that corner of Water Street where she could sit on her porch and have folks stop by to chat for a bit.

She was little (never reaching 5 feet) but had strength beyond and was never a pushover. She was fiercely independent, which was true throughout her life, even in her last days. She knew what she wanted, and she was determined to get it. She was also smart and witty, reading National Geographic often, listening to National Public Radio, and watching Jeopardy daily.

Mary’s faith was paramount in her life. She suffered heartbreak in the loss of her brother Robert, sister Pauline, husband Robert (Bob, Butch), and son Mike, but through these times her faith was unwavering. She was strong with Jesus, and we all benefited from that strength. Mary grew up in West St. Olaf Church in Hayfield, but after marrying Bob, became a member of Little Cedar Lutheran Church in Adams. Serving in many capacities of the church, Mary helped with Circle, Bible study, and the Lutefisk Supper. She was renowned for her honey wheat bread which would always bring a good price at the silent auction.

Mary loved her family fully without exception. She was an extraordinary Mom and Grandma. She was proud of all her children, grandchildren, and their spouses. We will miss her forever but are so lucky to have had her love us and share her kind heart with us all these years. We are extremely grateful to have been part of her wonderful life.

Funeral services will be held December 19th at 11:00 am at Little Cedar Lutheran Church in Adams, Minnesota with Reverend Jeremy Johnson officiating. There will be a visitation 1 hour before the service at the church.

Arrangements are by the Adams Funeral Home.