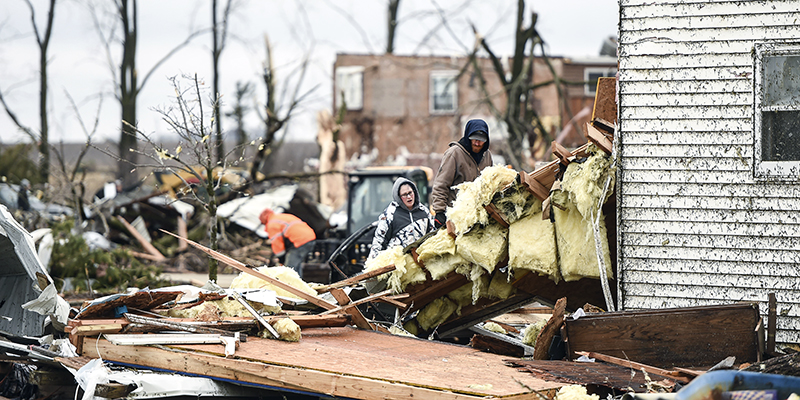 As 2022 draws to close, these are some of the biggest stories to from our region this year.

Red flags started going up in the days before Tuesday, April 12. Winter was giving way to unseasonably warm air, creating a volatile weather situation, which was unleashed that night.

In the days that followed, the National Weather Service would confirm that an EF2 tornado, packing winds of an estimated 130 mph, tore from southwest to the northeast through Taopi damaging around half of the small community’s structures. In total, 10 homes were a complete loss, with the other homes sustaining minor and major damage.

The tornado, which was on the ground from 10:46 p.m. to 10:52 p.m. that night, was just one of a string of tornadoes that struck the area and while there were no deaths, two were taken to the hospital with non-life threatening injuries.

“It was roaring,” said Taopi resident Angie Smith. “The moment we ran through to the basement we heard windows shattering. We were down in the basement for maybe a minute.”

Eight months later and the rebuilding continues, with construction and recovery continuing.

Estimates for the damage caused by the storm came to just under $1.6 million with $90,000 in utilities damage and $100,000 in county and city response.

KSMQ President and CEO Eric Olson smiles and celebrated all those who had a part in the new KSMQ Broadcast Center in September. Herald file photo

In 2022, two businesses celebrated openings of their new facilities.

In late August, Nu-Tek Biosciences celebrated the grand opening of its new complex on the northwest side of Austin, and produces animal-free peptones for pharmaceuticals for the biotech and wellness foods industry.

The total cost of the project was estimated at around $40 million. 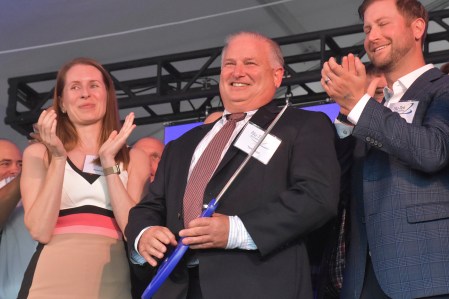 “We really looked at Austin because they have a very rich manufacturing history,” said CEO Tom Yezzi, during a groundbreaking in 2021. “It’s really the proximity to the healthcare industry with Mayo Clinic Health System and The Hormel Institute.”

Just a month later, KSMQ celebrated its new facility in downtown Austin with a ribbon cutting that officially opened its new Broadcast Center.

It was a special moment for an institution that was already celebrating 50 years. The new building comes in at 10,000 square feet.

Once up and operating, the new facility opened a new era for the influential local broadcasting company.

“We have never had our own facility,” said KSMQ CEO Eric Olson. “It may not seem like much, but we’ve never had a place built for television or media production. This is a huge first.”

While nothing has been set in stone yet, the farming and local communities were excited in February over the possibility of the University of Minnesota’s proposed Future of Advanced Agriculture Research in Minnesota complex.

The estimated $250 million project would partner the U of M with state and local entities to create a complex that would focus on a “one health” approach to agriculture, which seeks to study the intersection of both animal and human health.

And the U of M is eying the Austin, Mower County areas for the project.

“Mower is in a pretty unique spot if you go global,” said Brian Buhr, dean of the University of Minnesota’s College of Food, Agricultural and National Resource Sciences. “Minnesota is right on the 45th parallel, from Canada to Texas … stretch that band around the globe, 45-50% of the world’s agriculture is in that band. The band is highly representative of what we need to do to sustain global agricultural food security.”

The vision of the complex is to create a state-of-the-art teaching and research hub that will propel vital discoveries and further establish Minnesota’s position as a global catalyst and leader in food and agriculture innovation.

The project is still in the process of solidifying financial backing. The Hormel Foundation has pledged $60 million to the project. The U of M is hoping to secure another $60 million through state funding.

It’s been a long, hard road, but the City finally appears poised to begin work on renovating the city’s Wastewater Treatment Plant.

The project, which was seeing a steadily rising price tag, was finally approved for $105 million, a number well high of the estimated $76 million it would have cost in July of 2021. In one month alone, from July 2022 to August 2022 when the bid was approved, that estimate rose on a wave of inflationary costs to $94 million.

Not only did time prove to be frustrating, but actions at the state level also proved to be a thorn in the city’s side.

The project was originally approved to receive bonding dollars to the tune of $14.5 million, however, that money was stripped from the city at the last minute. While the Austin City Council hopes for bonding dollars this year, it doesn’t take away from the sting this year.

“I think the disappointment is with leadership,” Mayor Steve King said in a June City Council meeting during a presentation by Rep. Patricia Mueller. “It’s disappointing overall. We don’t have the luxury of waiting. We just have to get it done.”

In the shadow of this, the Council approved a rise in sewer fees over the next four  years to drum up the just over $8 million revenue to help cover costs associated with operations. The first increase is slated to go into effect next year at 15%, followed by a 10% increase in 2024 and a 7% increase in both 2025 and 2026.

The race was one for the history books, requiring a special primary followed by a special election to determine who would finish the rest of Hagedorn’s term.

Republican Brad Finstad narrowly won the special election over Ettinger and the two turned around and ran against each other again in November for a full term, where Finstad again carried the vote, 53.66% to Ettinger’s 42.45%.

“The voters of southern Minnesota have spoken,” Ettinger said when conceding the election. “I want to congratulate Brad Finstad on winning the election last night. Though I had hoped to celebrate different news, there is plenty for which to be hopeful.”

Late in the morning on Wednesday, Sept. 21, Austin Public School went into lockdown on a call of an active shooter, however, as the minutes ticked by it became evident that APS was just one of several schools throughout not only the state, but the nation, to received a “swatting” threat.

In quick order it was reported that Rochester Lourdes, Mankato West and Cloquet also received similar calls. Later in the day, Albert Lea was added to the list.

Ground was broken in November for the Austin Public Library remodel, which is slated to be completed by next June. Eric Johnson/photodesk@austindailyherald.com

In what seemed like a blow to its remodel project, the Austin Public Library officially broke ground on Nov. 2, with work beginning soon after.

The remodel project itself stretches back to 2017 and through all the fundraising efforts pre shovel work, the library was ready to accept bids, however, when the bids came in inflationary costs had ballooned the initial $680,000 estimates by $1 million more.

However, seeing the importance of the library to the community, the Austin City Council agreed to chip in the money to reach the minimum bid of $1,551,000 million with the library slated to pay back just $100,000 of that amount.

“I feel fabulous about the council’s willingness to forward the $700,000 to help complete the project,” said Library Director Julie Clinefelter at the time. “I think they understand the importance of the library, how it positively affects so many in the community, and that this project updates the building for the next 25 years.”

In late November, it was announced that Sheriff Steve Sandvik, who had just won a second term as sheriff earlier in the month, would be taking a leave of absence to address medical issues.

The announcement came in the wake of allegations concerning conduct in mid-November when an unnamed subject reported on Nov. 16 that Sandvik was acting out of character and it was believed he was intoxicated.

“That concern was not verified with a blood test or PBT,” said County Administrator Trish Harren. “In the absence of the sheriff admitting to that allegation, it remains an allegation.”

While specifics of the incident or the medical issues were never divulged, Sandvik issued a statement:

“As the elected sheriff, I serve the citizens of Mower County. I take this responsibility seriously. In order to continue serving the residents with the expectations I put on myself, I need to step away to handle a variety of medical issues,” Sandvik said. “Please understand, these types of medical decisions are personal. During my brief absence, I ask for privacy needed so I can get back soon. The team we have assembled at the Mower County Sheriff’s Office will continue to provide uninterrupted services during my absence.”

Purples and blues paint the sky during this past July on the second day of Freedom Fest. Herald file photo

The COVID-19 pandemic, which continues to be a part of our daily lives, took a lot of things from us in 2020. One of those was the two-day Freedom Fest marking the Fourth of July celebration in Austin.

A one-day event was held in 2021, but it never quite reached the height of the beloved summer celebration.

However, this summer the Austin Enhancement Group, a newly formed non-profit in Austin took the reins and brought back the two-day event while at the same time, the Austin Area Chamber of Commerce held its annual parade.

Despite rain hot and oppressively humid conditions, people came out in droves for the newly revived event, capped with a massive fireworks display on the second night.

In mid-December the Hayfield Community Schools District was rocked when it was announced that Hayfield High School Principal Grant Thomas Klennert had been arrested and charged with four felony counts of criminal sexual conduct dating back to when he was a teenager.

The arrest followed an arrest warrant issued out of Wabasha County.

A statement from Hayfield Superintendent Gregg Slaathaug indicated that Klennert had been placed on administrative leave.

“The Hayfield School District is aware of the pending criminal charges regarding Grant Klennert, an employee of the school district,” the statement read. “The school district takes the safety and security of our students very seriously and has been cooperating and will continue to cooperate fully with law enforcement in its investigation.”