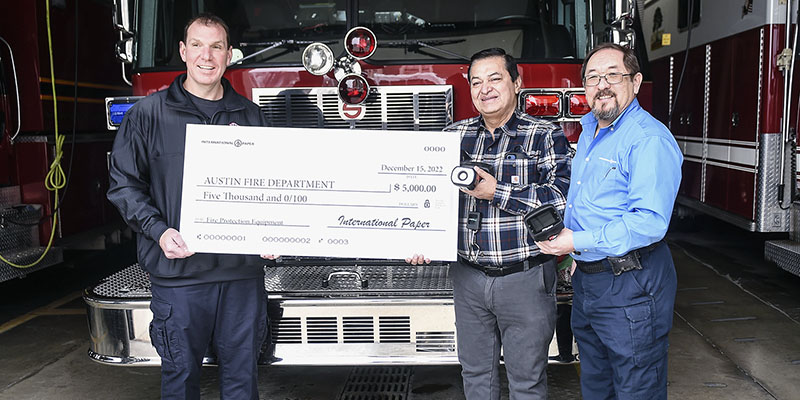 For the second year in a row, the Austin Fire Department received a grant from the International Paper Foundation and the money has already been earmarked.

The grant comes just one year after the IP Foundation presented the fire department with $6,000, which it used to purchase gloves and hoods for firefighters. 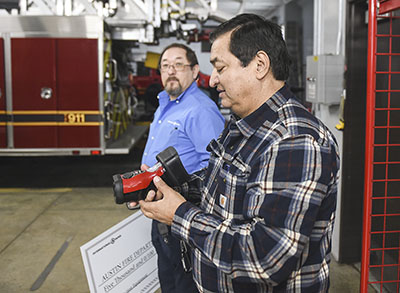 International Site Manager Felipe A Juarez checks out a thermal imaging camera like the one recently purchased by the Austin Fire Department thanks to money donated by the International Paper Foundation. Eric Johnson/photodesk@austindailyherald.com

“It enhances our community,” Powell said of the donation. “Putting back in the community where we’re at. They’ve actually used these thermal imaging cameras at our plant before.”

McCoy said that the department now has four cameras with a goal of ensuring that all teams going into a structure will have their own dedicated camera.

This fourth camera is used by Austin FD’s dedicated team of firefighters who go into buildings to rescue other firefighters if necessary.

“Community partners are wonderful,” McCoy said. “Over these last two years, the money they’ve given us has allowed us to move forward as a department.”

The cameras allow firefighters to not only detect fires and hotspots within a structure, but also determine where victims might be trapped. McCoy said that the camera and the gear purchased last year also helped further its cancer reduction goal.

“Allowing another camera with our crews is absolutely huge,” he said.

The IP Foundation has donated money in all the communities the company is located in and has included donations in the past to the Shakopee Fire Department, the Minnesota Landscape Arboretum and the Art Museum of Minnesota.

“The IP Foundation has been around for a lot of years,” Powell said. “What we do is donate money to communities where they need it.”