In memory of Dustin: Rosel’s have raised gifts for others in memory of their son 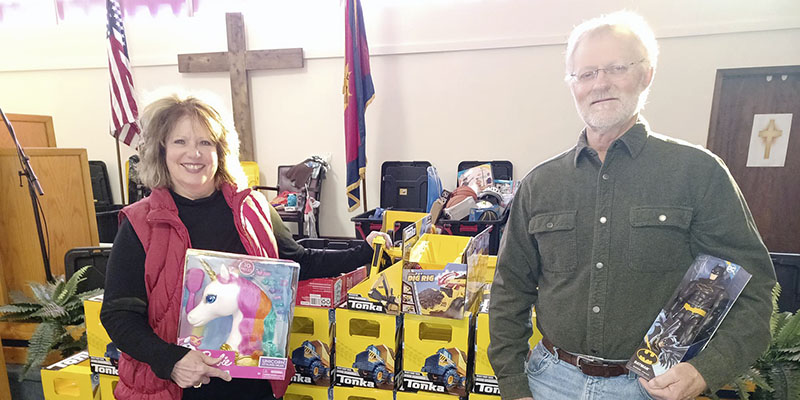 Madonna and Bob Rosel stand with toys donated to the Salvation Army in memory of their son, who they lost in a car accident in 2000. Photo provided

Bob and Madonna Rosel know exactly what the power of giving means, although they had to overcome heavy grief before sharing the spirit over the last 23 years.

Bob and Madonna lost their son Dustin to an automobile wreck in June of 2000 and ever since then, they’ve held an annual party to collect donations for the Salvation Army.

It all started when Bob and Madonna, who have two other adult children living in St. Paul, bought a sweatshirt for Dustin on Christmas after he passed away. When they didn’t have anyone to give it to, they donated it to the Salvation Army.

Since then, they’ve held an annual party, where they’ve invited friends and family to help bring gifts for those in need. The celebration grew so big that it is now held at the Cedar River Golf Course in Adams on the first weekend of November.

Guests are asked to bring a gift or to make a donation to the Salvation Army in Dustin’s name.

The Rosel’s have seen joy and heartbreak during the holidays and they’re hoping families in Mower County can feel a little light from the gifts they receive from the Salvation Army.

“I sometimes wonder if people realize the level of need that does it exist in our nation and in Mower County. The holiday season seems to emphasize the pluses and minuses in people’s lives,” Bob said. “If things are rolling well, then it’s a celebratory time and all of the music and family gatherings are happy. But there are families who are struggling and maybe they’ve lost a loved one close to the holiday season, or they’re out of work and can’t provide for their family. Christmas is a hard time for them. If people can empathize with them and donate, especially if they see a red kettle, that would be great.”

The collections that the Rosel’s have brought in have grown every year and the total number was well over one hundred this year according to Major Jeff Strickler, who said that it is priceless to have a family that goes out of its way to make sure so many other families are not left out on Christmas day.

Strickler said the request for gifts in Mower County has gone up to nearly 600 this season and he encourages all to follow the Rosel’s lead.

“They always bring in cartloads and it’s helped hundreds of kids for sure,” Strickler said. “I’ve seen toys, games and I’ve seen bicycles. We usually ask for toys around Christmas, because it’s hard to get sizes for clothes.”

Bob said his family felt sort of lost on the first Christmas without Dustin, but they still feel that he is a very real part of their family.

Although they miss him, Bob was able to turn Dustin’s memory into a gift to others with the annual donations his family generates.

“We’re humbled by the fact that so many people continue to attend our party,” Bob said. “Every year we get over 100 people and every year it seems like people are just as generous as they can be. It’s humbling for us to be the catalyst for those donations.”