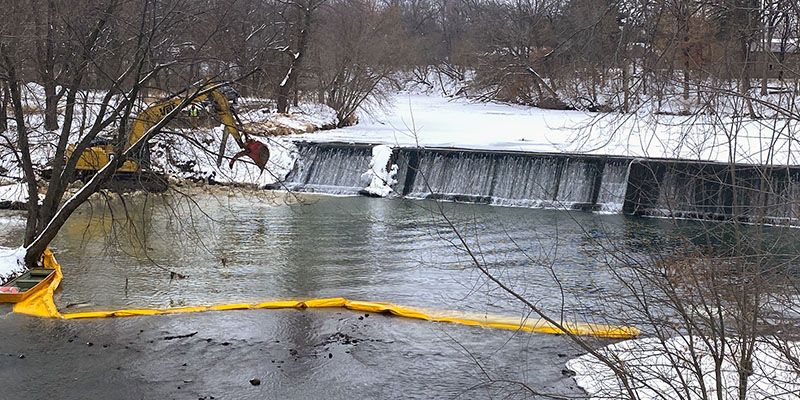 Work is set to begin on the Ramsey Dam that will help shore up the structure. Photo provided

Hormel Foods Corp. will be strengthening the foundations of Austin’s historic Ramsey Dam during the next two weeks to slow the deterioration of the structure on the Cedar River.

Work on the dam is starting this week and, depending on the weather, should last about two weeks as crews remove trees and add chunks of rock or riprap on both sides of Ramsey Dam and below it, including filling a large scour hole, said Tom Raymond, director of sustainability for Hormel.

This will help protect the wing wall and both ends of Ramsey Dam, which has created Mower County’s largest body of water for about 150 years.

Hormel Foods has owned Ramsey Dam since 1974. It has crews set up on the public, north side of the dam across the river from The Old Mill Restaurant on Austin’s northern city limits.

Heavy machinery will access the dam from that side; only foot access will be needed on The Old Mill’s property. In spring, crews will stabilize the site’s soils and install warning signage above the dam.

As part of the work, Raymond said, monitoring systems will be installed to survey monuments in the spillway as well as monitor water levels and seepage at the south abutment. These efforts also will help track any changes in flow or seepage that would indicate the need for additional repairs or maintenance.

“The investment and improvements being made to the Ramsey Dam will keep the structure and surrounding area safe for recreational users,” Raymond said. “In addition to creating a new canoe launch, preventing erosion and improving public safety are important priorities of this project.”

During the project, a donation from Hormel Foods will cover the cost of rock materials needed to build a walk-in access for canoes and kayaks below Ramsey Dam next to the 11th Place Northeast bridge. This site is a popular place to launch a trip down the Cedar River State Water Trail but its current setup can be challenging for paddlers.

“With the river flow and shoreline dropping immediately into a few feet of water, the site really needs a walk-in access for paddlers,” said Tim Ruzek, outreach coordinator for the Cedar River Watershed District. “This access, designed by the City of Austin’s Public Works, will be greatly appreciated by the public along with the support by Hormel Foods to protect the dam and Ramsey Mill Pond behind it.”

Ramsey Dam creates nearly one mile of backwaters on the Cedar known as Ramsey Mill Pond, which — at about 53 acres — is the largest body of water in Mower County, one of four Minnesota counties without a natural lake. It also is Mower County’s most-popular destination for ice fishing, and the Minnesota Department of Natural Resources maintains a boat ramp and parking area above the dam.

Since 2018, CRWD has partnered four times with the Minneapolis nonprofit Wilderness Inquiry to provide a week’s worth of free Canoemobile programming at Ramsey Dam to area students on land and on the river, Ruzek said. Each public and private school in Mower County, along with Blooming Prairie and Hayfield schools, participate in Canoemobile. Students paddle up and back on Ramsey Mill Pond in 10-person canoes guided by Wilderness Inquiry.

Originally built in 1871-1872, Ramsey Dam provided river water to power a flour mill that operated until 1933 in the building that has hosted The Old Mill Restaurant since 1949.

According to Raymond, Hormel Foods acquired the dam nearly 50 years ago likely to protect its downstream sources of groundwater for the company’s production facility. The company, however, no longer uses independent wells because Austin Utilities supplies its water.

Ramsey Dam’s current structure consists of three concrete sections, with the northern portion dating back to 1916 when it replaced a wooden wall. A few years later, the middle, wooden section was rebuilt from concrete.

Not until 1947 was the third, wooden section next to The Old Mill replaced with concrete following a break a few years earlier. That section also had a breach in 1941 that dropped the river’s backwaters about 5 feet. Local outdoor sportsmen in the 1940s helped repair that break and fund the wall’s replacement in 1947 to protect Ramsey Mill Pond’s water supply.

In 2017, Mower County acquired about 20 acres of flood-prone land running from Ramsey Dam to the 1911 rail bridge on the north/west side of the river. The Hormel Foundation and Minnesota DNR funded the effort. Today, nearly 23 acres overall are under public ownership, including the 1911 bridge that starts the state’s Wild Indigo Scientific Natural Area (SNA) trail on an old rail bed.

Other parts of this area — mainly the old Ramsey Golf Course clubhouse — were acquired by the county through flood mitigation after the Austin area’s worst-known flooding in 2004. Prior to the golf course, this area was a public park where people fished, swam, went boating and camped. A century ago, some Austinites flocked “up north” to cottages or cabins along Ramsey Mill Pond.