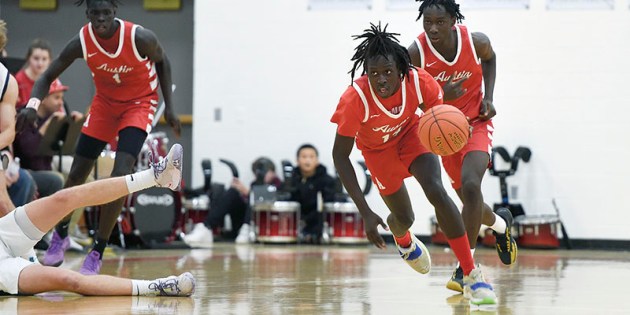 Austin’s Manny Guy picks up a loose ball and heads into the fastbreak during the first half against Rochester Century Tuesday night in Ove Berven Gym. Eric Johnson/photodesk@austindailyherald.com 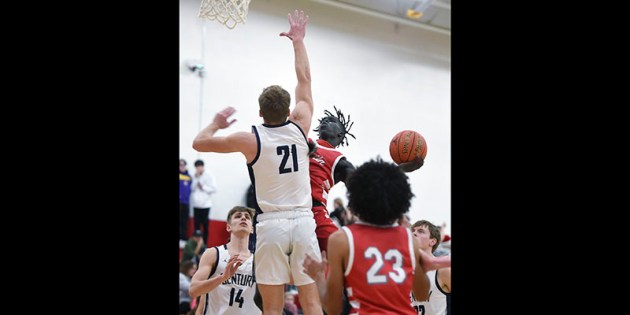 Austin’s Ater Manyuon shoots under pressure during the first half against Rochester Century Tuesday night in Packer Gym. Eric Johnson/photodesk@austindailyherald.com 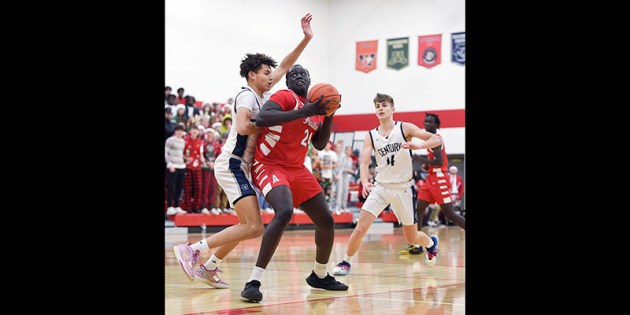 Austin’s Buai Duop turns to the hoop during the first half against Rochester Century Tuesday night in Packer Gym. Eric Johnson/photodesk@austindailyherald.com 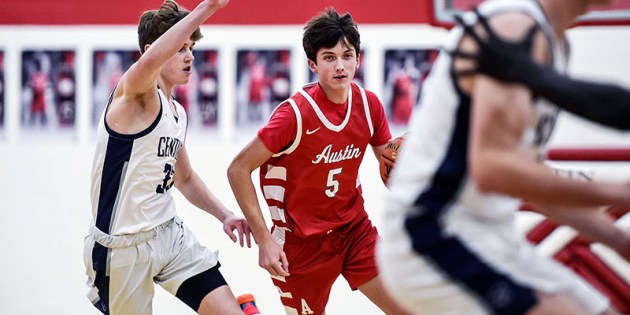 Austin senior Manny Guy may not have been on the court as much as he would’ve liked on Tuesday night, but he was on it long enough to make a memory that he and Packer fans won’t soon forget.

The Packer boys basketball team trailed by as many as 16 in the second half, but they finished with a late flurry and shocked Rochester Century on a buzzer-beating three by Guy to clinch a 72-71 comeback win in Packer Gym Tuesday.

The final play wasn’t perfect, but the ending was. After Buai Duop missed a post up shot that would have tied the game up, Jacob Herrick pulled down an offensive rebound and found Manny Guy, who drained a deep wing three to win the game at the buzzer.

“I just wanted to get out there and make shots to help my team. That shot felt so amazing,” Guy said. “I knew it was going in, but I didn’t see how much time was left when I shot it.”

Morris Jabateh stole an inbounds pass to give Austin its final chance after Century (3-2 overall) had run out of timeouts down the stretch. Jabateh scored three points in the win, but that wasn’t what he was concerned with as his team finished the game on a 12-1 run.

“This one was personal for me, because we played Century as freshmen and we lost by a buzzer beater to them after coming back from down 30. We’ve also lost a lot of close games to them over the years,” Jabateh said. “We’re tired of losing to them.”

Jabateh is a senior captain as a first year varsity player and it’s mostly the defensive effort he puts in that helps the team.

“I’m not going to go out and score 30 or 20 points in a game,” he said. “I just have to be our defensive anchor and make sure everyone is talking.”

Guy, who had 14 points, also swished a desperation wing three to bring the Packers within 71-69 with 16.3 seconds left. That shot, and the last one, made Austin head coach Jamaal Gibson glad that he was wrong when he had taken Guy out of the game for offensive stretches earlier in the night.

“I took Many out and he showed me how stupid I was tonight,” Gibson said. “Manny is a good player who comes off the bench for us and he accepts it and Morris made a great play on that steal. Any time you have a team that doesn’t give up, it’s amazing. We made big shots and they missed some free throws. We had a little Christmas spirit tonight.”

Austin (4-1 overall) came as close as 61-60 when A’triel Terry converted a three-point play on a put-back and Ater Manyuon, who scored 22 points, glided in for a lay-up with six minutes left in the game.

Century responded by taking a 10-point lead with two minutes left, but that didn’t last.

Austin’s Herrick took a scary fall in the first half when he was fouled on a dunk attempt with the score tied at 14. The Packers used that play as an energy boost as they responded with a quick 8-0 burst that saw Manyuon convert two three-point plays.

The Panthers eventually turned it up on defense and responded with a 14-2 run that saw them go up 33-24.

Jack Lang hit four threes in the first for Austin and finished with 22 points. Lang gave the Packers some late fire as he banked in a fall-back triple to cut Century’s lead to 70-66 with 52.6 seconds remaining.

It’s been a year of transition for the Packers with a new coach and a lot of new players, but things are feeling connected for the team right now.

“I love these guys,” Guy said. “We’re always talking to each other and we’re always playing hard.”