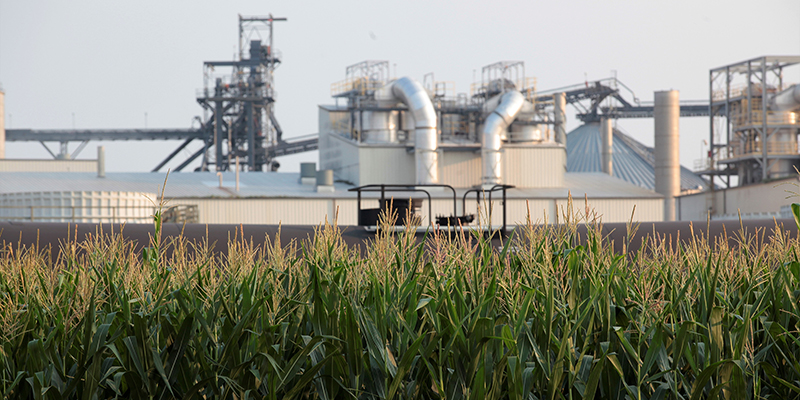 FILE - Project developers plan to build carbon capture pipelines connecting dozens of Midwestern ethanol refineries, such as this one in Chancellor, S.D., shown on July 22, 2021. The Environmental Protection Agency on Thursday, Dec. 1, 2022, proposed increasing the amount of ethanol and other biofuels that must be blended into the nation’s fuel supplies over the next three years, a move welcomed by renewable fuel and farm groups but condemned by environmentalists and oil industry groups. (AP Photo/Stephen Groves, File)

MINNEAPOLIS (AP) — The Environmental Protection Agency on Thursday proposed increasing the amount of ethanol and other biofuels that must be blended into the nation’s fuel supplies over the next three years, a move welcomed by renewable fuel and farm groups but condemned by environmentalists and oil industry groups.

“This proposal supports low-carbon renewable fuels and seeks public input on ways to strengthen the program,” EPA Administrator Michael S. Regan said in a statement. “With this proposal, EPA seeks to provide consumers with more options while diversifying our nation’s energy mix.”

The proposal also includes new incentives to encourage the use of biogas from farms and landfills, and renewable biomass such as wood, to generate electricity to charge electric vehicles. It’s the first time the EPA has set biofuel targets on its own instead of using numbers from Congress. The agency opened a public comment period and will hold a hearing in January.

The goal of the existing Renewable Fuel Standard is to reduce carbon emissions that contribute to climate change, expand the country’s fuel supply, strengthen energy security and reduce fuel prices for consumers. Ethanol is a key part of the economy in many Midwest states, consuming about 40% of the nation’s corn supply.

But environmentalists argue that it’s a net ecological and climate detriment because growing all that corn fosters unsustainable farming practices, while the oil industry says ethanol mandates constrain free market forces and limit consumer choice, and that higher blends can damage older vehicles.

Geoff Cooper, president and CEO of the Renewable Fuels Association, told reporters on a conference call that the EPA’s plan creates a “clear pathway for sustainable growth for our industry when it comes to the production and use of low-carbon fuels like ethanol.” He said it also bolsters the industry’s push for year-round sales of gasoline with a 15% ethanol blend, as well as sales of the 85% ethanol blend E85.

“As the administration is working to address climate change, we’ve long known that biofuels will play an important role in reducing greenhouse gases while having the added benefit of providing expanded opportunities for farmers,” National Farmers Union President Rob Larew said in a statement.

“This is a toxic plan directly at odds with the Biden Administration’s commitment to Environmental Justice,” Sarah Lutz, climate campaigner at Friends of the Earth, said in a statement. “Charging electric vehicles with forests and factory farms should be a non-starter.”

Geoff Moody, senior vice president of the American Fuel & Petrochemical Manufacturers said the Renewable Fuel Standard was meant to be a liquid fuels program, not an electric vehicle program. He urged the EPA to go back as it develops the final rule and reject “yet another massive regulatory subsidy for electric vehicle manufacturers.”

The target would grow to 22.68 billion gallons for 2025, including 15.25 billion gallons of corn ethanol. The plan also calls for growth in cellulosic biofuels — which are made from fibrous plant materials — biomass-based diesel and other advanced biofuels.

Republican U.S. Sen. Chuck Grassley, of Iowa, the country’s top corn and ethanol producing state, said in a statement that the EPA should have gone further to require even more use of advanced biofuels to move freight, which he said would help lower prices for consumer goods.

Cooper said there’s probably no way to meet the proposed higher targets without more use of E15 and E85 instead of the conventional 10% ethanol mix.

That makes it important to eliminate regulations that block summertime sales of E15, he said.

So, he predicted, the EPA’s proposal should bolster prospects for legislation introduced this week by Democratic U.S. Sen. Amy Klobuchar, of Minnesota, and GOP Sen. Deb Fischer, of Nebraska, to allow year-round sales of E15 nationwide. E15 sales are usually prohibited between June 1 and Sept. 15 because of concerns that it adds to smog in high temperatures.

Eight Midwest governors asked the EPA in April to allow year-round sales of E15 in their states. But Cooper said the new bill would provide a “nationwide fix” that even the American Petroleum Institute considers preferable to the current patchwork of temporary waivers and ad hoc solutions.