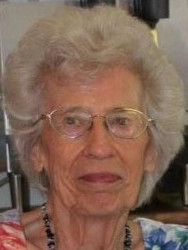 She was born March 7, 1930, to Mathilda Molly Bollman and Henry Emil Plocher. She was child number nine so always said she had lots of love and fun. She lived near Chaska, moved to a farm near Mayer, and graduated from Litchfield, all in Minnesota.

Her first job was at a doctor’s office, and she always appreciated that experience. She was also very active in high school, including orchestra, where she met her husband of 70 years, Douglas Earl Hutchins.

Together they lived in Morris, Minnesota and then moved to LeRoy. They raised four children and were very civic minded. Eileen was a city council member for 10 years, a church leader at LeRoy Lutheran, a singer in the choir for 50 years, a member of a women’s barbershop quartet, and a part of a state champion bowling team. She made yummy pies for the local bowling alley and contributed in Garden Club, Pleasure Club, and three bridge clubs. Eileen was passionate about playing cards and greatly enjoyed the yearly card marathon contributing to the Cancer Telethon. Another passion in her life was collecting buttons. The Shooting Star Bike Trail was an important project, and she worked through Prairie Visions to accomplish their goal. She also was the treasurer for LeRoy Area Foundation.

Eileen has appreciated the care and friendships at Wildwood Grove, moving there after enjoying their first two homes on Cabot Street. She actually broke ground for that facility.

Preceding her in death were her parents, her siblings, her husband, sons-in-law, and a great-grand daughter.

A funeral service is planned for Thursday, December 15th at 1pm at LeRoy Lutheran Church with visitation 2 hours prior also at the church. Condolences may be left at www.Hindtfuneralhoomes.com