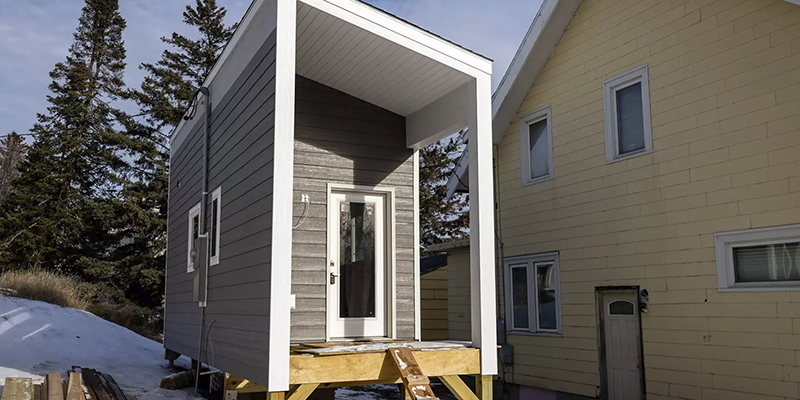 A tiny home under construction in Duluth’s East Hillside neighborhood is seen on Thursday. Duluth has recently changed its rules to encourage the construction of tiny homes. Ben Hovland/MPR News

On a busy street in Duluth’s Central Hillside neighborhood back in October, developer Sean Dixon stood in front of the pilot “tiny home” he’s building and described its interior. It didn’t take long.

“So, we have 175 square feet, with a sleeping loft, single bathroom and then a kitchen and living room area,” he said.

The home is built on piers, a few feet off the ground on a very narrow, sloped lot in between two older homes. Dixon hopes to rent it to traveling nurses who come to work at one of the city’s two hospitals located a few blocks down the hill.

He knows it’s not for everyone. But he believes there’s a market for his bare-bones, eco-friendly vision.

“Definitely a minimalist. Someone who’s only going to be here for a short amount of time, who just needs good living quarters that are safe and functional. Or somebody who really enjoys the outdoors and doesn’t want to spend a lot of time indoors.”

Dixon runs a company called Simply Tiny Development. He’s from Denver. But he was lured to Duluth more than three years ago when the city offered assistance to developers who agreed to pilot innovative housing projects on hard-to-build-on lots, like this one.

“Duluth really relaxed its standards and codes, and the new policies that the city set up allows for an easier route for adoption for tiny homes,” Dixon said.

This home is one of a few new projects in Duluth — ranging from a development of 18 workforce housing units to a pair of small units geared toward veterans experiencing homelessness — featuring very small, compact homes.

They’re not all, technically, “tiny homes,” which are less than 400 square feet in size.

But they’re part of a broader trend of building more affordable, more efficient, and much smaller homes to help ease the housing supply crunch that’s hitting communities like Duluth and beyond.

That trend is much more advanced in states like California, said Jamie Stolpestad, who co-owns a company called YardHomes MN, which built the two small homes to house veterans in Duluth. But Minnesota is now beginning to follow in their footsteps.

“I would say at the moment, the aspiration for this sort of smaller, more efficient home is greater than the actual implementation,” Stolpestad. “But the implementation is catching up.”

Duluth has made several changes to its zoning and building policies to foster the development of more “compact dwellings,” as Stolpestad prefers to call them.

The goal is to meet a huge demand for housing of all types, in all sectors and all categories, said Adam Fulton, Duluth’s planning and economic development director.

“When you’re trying to shape an economy that’s good for the entire population, you’ve got people in different parts of their lives that want different sizes of houses,” he said.

“And we don’t have that in Duluth. Our houses tend to be a little bit older, and a little bit more uniform. Many constructed pre-World War II. And so, our goal here is to create as many opportunities as possible to expand the housing stock.”

One way the city has done that is to allow developers to build narrower homes on city lots.

Three years ago, the city also changed its zoning code to allow what are known as “cottage home park developments,” essentially clusters of compact homes grouped together on a single parcel of land.

Earlier this year, the city’s Housing and Redevelopment Authority broke ground on a project called Fairmount Cottages on the western side of Duluth. It includes 18 small one and two bedroom homes, or “cottages,” 620 and 720 square feet, clustered together in two groups of homes, divided by a ravine that’s crossed by a pedestrian bridge.

It’s designed to be a mixed-income development, geared toward families making between 50 and 100 percent of the area median income, up to nearly $80,000 for a family of three.

“These houses will actually face inwards; their porches will face the interior of the development. There’ll be trails that interconnect them to each other. It’ll just be this nice little community where people can really develop that sense of being of being neighbors.”

Fulton said the concept is similar to the Milwaukee Avenue Historic District in the Seward neighborhood in Minneapolis.

But this type of development is not allowed under many city zoning codes around the state, which encourage more suburban-scale residential development. Fulton said a typical development approach would have only allowed for three or four houses on the site.

Schweiger said he’s approached Twin Cities bedroom communities with projects similar to Duluth’s Fairmount Cottages, and said, “‘Hey, we’d like to build in your community, we’ve got this really cool concept.’ And they tell us ‘Thanks, but no thanks.’”

Schweiger had planned to build a cottage development on a rocky outcropping in Duluth known as the Point of Rocks, but that project is on hold because of an easement dispute with neighbors.

He’s now working on a different project in Hinckley. A different developer has proposed a similar development in the works in Willmar in west-central Minnesota.

Schweiger said developers are increasingly intrigued by tiny home developments because they’re less expensive to build than a more traditional apartment building and so they can offer more amenities.

Schweiger believes cities around Minnesota should start to think of compact, smaller homes as creative, affordable workforce housing that can help grow their communities.

“You can start a family there. It’s not going to break the bank. You get a yard.” It’s the “American dream” again,” he said.

Until a couple years ago developers in Minnesota couldn’t even build houses smaller than 400 square feet.

But in 2020, Stolpestad explained, the state residential building code was amended to allow them, as long as they’re connected to sewer and water and built on a frost-protected foundation.

In other states, “tiny homes” are often built on wheels, and can be transported from place to place.

Until about 2006, he said, local governments didn’t allow them. Now, 37 cities and counties permit their use, including Minneapolis, St. Paul and Duluth.

That’s the rule that permitted the placement of two small homes in Duluth to house veterans, a partnership with the Minnesota Assistance Council for Veterans.

There are other challenges. In Duluth, developer Sean Dixon encountered delays and unexpected costs in hooking up his tiny house to city sewer and water.

Some neighbors have bristled at new development on lots that have long sat vacant, and questioned the projects’ impacts on property values.

And while the cost of building smaller homes is of course smaller, Fulton said other costs, including utilities and permitting, are the same.

Still, as developers and lenders become more comfortable with the concept of tiny homes, Fulton only expects the trend to grow.

“We’ve had lots of inquiries; I would expect that we will see more of it. We’re just trying to make sure that we are providing as many opportunities as we can across the board for new housing in Duluth,” he said.