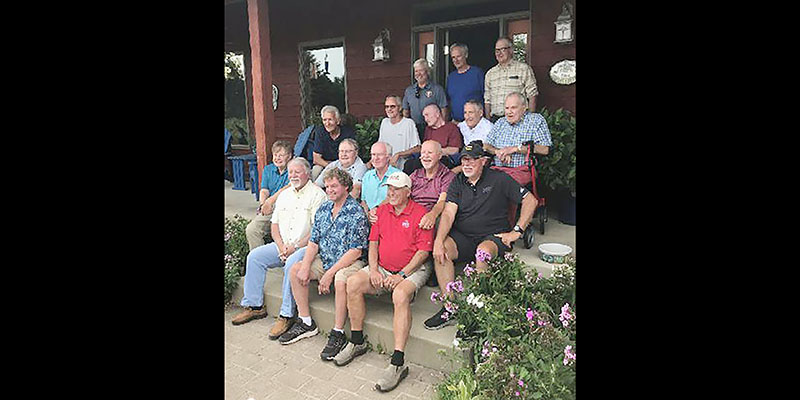 The 1972 Riverland Community College baseball team recently reunited for a reunion this past September. Photo provided

What do you get when you take a bunch of 19 and 20 year old guys from towns around southern Minnesota and north Iowa, add a huge dose of love of the game, a deep camaraderie and will to succeed, plus a coach who knew how to harness all of that energy?

They made history during their two years on campus. The team had no field at the college on which to play or practice. They had no scholarship players. The team sported a couple of All-State selections from area schools, but there were no real stars.

Their 18-3 record that season was a result of hard work, dedication and a commitment to a team; all qualities instilled in the squad by coach Earl Perkins. The players gelled together extremely well, both on and off the field, and they were united by a genuine love of the game of baseball.

As coach Perkins pointed out, “They played the game the way it was supposed to be played. They understood the fundamentals, and they worked diligently to improve as the season progressed. It was a great bunch of young men to work alongside.”

Austin qualified for the State Tournament in 1972 and traveled to Bloomington to join three other teams in the Championship Series. The Blue Devils faced the dreaded Normandale Community College in the semi-finals. Something of a mythical David vs. Goliath match-up.

Normandale was a powerful metro school facing off against “upstart” Austin.

In an extra inning affair that lasted nine innings, Austin shocked Normandale with a 10-9 win. A strange play that defies description ended the game in Austin’s favor.

The next day in the finals, Austin’s opponent was Fergus Falls, another outstate team with a rich baseball tradition and a heavy emphasis on power hitting coupled with pitchers who threw hard-to-hit fastballs on both corners. Again, the Blue Devils pulled off the unimaginable, upsetting Fergus Falls 6-4 in nine innings. It was a sweet victory for Coach Perkins.

It was Austin Community College’s first ever state championship. The team garnered yet another distinction in the process. Austin was the first Minnesota community, over the years, to win a public school championship (Austin High School), a private school championship (Pacelli High School) and a community college title (Austin Community College). Reaching that peak of excellence on three levels has probably been equaled in the ensuing years, but at the time it was quite the significant milestone.

The 1972 squad was inducted into the Riverland Athletic Hall of Fame in 2015.

On Sept. 15 of this year, 12 members of the team met at Joe and Linda Dolan’s home in rural Austin for its 50th reunion. It was the fourth reunion the team celebrated over the years and it speaks to the closeness the members feel toward one another. The players’ wives join in the outings and share a close bond together as well.

Sadly, teammate Randy Kvam passed away shortly after the most recent reunion. Coach Perkins, the players and wives extend condolences to the Kvam family.

Randy is sorely missed by all.