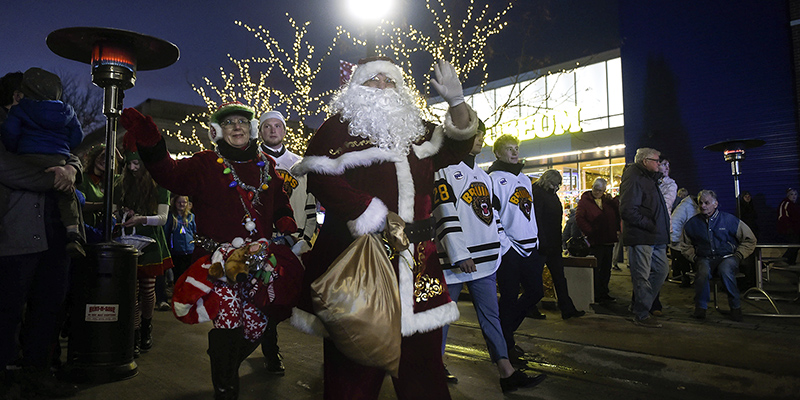 Santa Claus waves as he and others make their way to the main stage during the Hometown Christmas celebration in November in downtown Austin. Eric Johnson/photodesk@austindailyherald.com

Simply put, if you can’t find something to do in Austin this holiday season, you aren’t looking hard enough.

During a time in the nation and world where finding good will can be tricky, Austin and the surrounding area goes out of its way to create events that are fun for the family during the holiday season.

Whether it’s old favorites continuing through the years, new events or a combination of the two, Austin has more than enough to keep you in the Christmas spirit.

And really, Austin has always been that way. Sure, it can be argued … even stated … that other communities hold plenty of activities as well and we’re not going to dispute that. But speaking plainly of Austin, even if something goes by the wayside, somebody always seems ready to try something new.

Take for instance the Jay C. Hormel Nature Center’s new Merry and Bright Night, which will be held from 4-8 p.m. on Dec. 8, which will invite people both indoors and outdoors for plenty of fun activities.

Or the Austin Enhancement Group, who came together to once again bring back the spirit of Christmas in the City with a Hometown Christmas, which had a lot of the same fun elements its had in the past with the promise of something new coming in the future.

How about the return of Michael Veldman and Friends to Austin with a stellar show planned with the Austin Symphony Orchestra at 2 p.m. on Dec. 11.

And that’s just the tip of the iceberg. Look around Austin this time of year and the Christmas spirit is apparent to all. We invite you to take part in these events when available and be happy knowing you live in a community  with so many people endeavoring to bring and establish fun in Austin.

Letter to the Editor: Nine months of inconvenience, or a lifetime of regret?