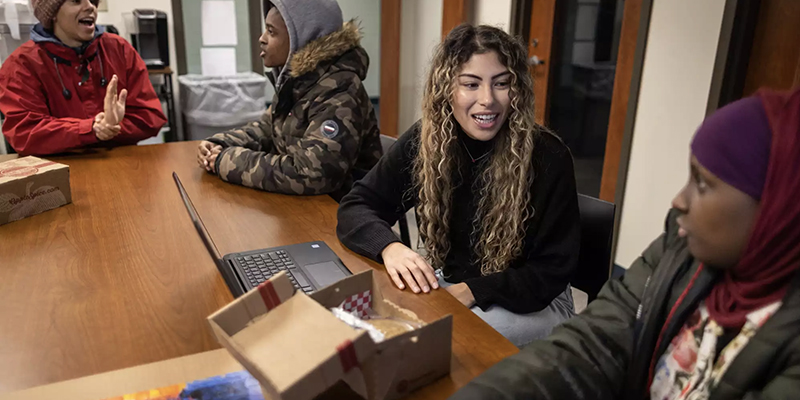 Marisa Gomez chats with another student at her work-study office at St. Paul College on Tuesday. She is one of many students at community colleges struggling to find a balance between school, work and the rising cost of products. Ben Hovland | MPR News

Marisa Gomez takes a full load of classes at St. Paul College each semester and participates in a work-study program. She’s one of those students caught in the financial middle: She earns enough to disqualify her from receiving any grants, while simultaneously needing to take out the maximum amount of student loans possible.

Still a few hundred dollars short on her recent tuition payment but unable to work another job with her current schedule, Gomez relied on emergency funds from the college to pay for classes.

Others share Gomez’s experience as the increasing cost of living takes its toll on students. At St. Paul Community College, one of the most affordable institutions in Minnesota, many students are paying their own way through school while working part time.

This financial stress has been a source of worry, frustration and anxiety for Gomez.

“We can burn ourselves out from trying to be doing so many things,” she said.

Some students taking fewer classes so they can work more

Other students said they feel stuck in a cycle, working jobs to keep up with the rising cost of college but end up taking fewer classes as a result.

“It feels you’re getting hit from all angles,” said Isaac Alberg, another student at St. Paul College. “It comes up in a crossroads between wanting to continue school, but then a part of me feels like maybe I had to cut down on class even though intrinsically, that’s not what I desire.”

Tuition and fees for full-time students at St. Paul College cost slightly more than $6,000 for the 2022-2023 school year. This has increased by around 10 percent since 2019, according to data from the Minnesota Office of Higher Education.

While the cost of school itself has only gone up a couple hundred dollars for most students in recent years, the rising cost of everything else in life is pushing on the part of their budget reserved for school. Rising prices of food, gas and even care for their pets are squeezing their budget. Gomez, who drives to classes each day, said at one point she was filling her car with gas at least once a week for around $70.

For Desirae Obermiller, a student at Century College and administrative assistant at St. Paul College, this experience has increased the length of time it’s taking to get her degree.

“I can only take two classes, because of how much I work, rather than five. It really slows down the timeline a lot, which is expensive, and makes everything else a lot harder,” she said.

Most international students are required to take a certain number of credits each semester, often enough to maintain a “full-time” student status. Students studying in the U.S. with F1 visas are generally allowed to work on campus for only up to 20 hours a week and most institutions require a form of health insurance while in the country.

Rengifo said there is often a false perception that these students must be coming from high-income families in order to be studying internationally. Between high inflation rates in Colombia and paying for classes and insurance, the cost of school adds up quickly.

“I think sometimes when [people] see an international student, they say ‘oh, he has money or he doesn’t need any help,’” Rengifo said.

Administrators at the college said they are aware of how the cost of living is impacting their students and try to offer support when they can.

The college is opening a food pantry on campus to help students facing food insecurity, a concern that has been raised by students more frequently in recent months, according to Jason Twombly, a student loan navigator in the college’s office of student affairs.

Administrators are also urging students to apply for federal financial aid more than ever, as numbers show fewer students are filling out the FAFSA. The college is also distributing large amounts of emergency relief funding from the government to students, like what Gomez received to help pay tuition.

“I’m waiting for the day where someone actually does have an emergency. 99 percent of applications are for just basic needs,” Twombly said. “Do I try putting gas in my tank? Do I feed my dog? Or do I go to class? This is the reality of the situation for so many of our students.”

But St. Paul College is also feeling economic strain as it aims to support its students. Enrollment has trended downwards for several years, despite seeing a slight increase this semester, according to Kay Francis Garland, associate vice president of Enrollment Management and Student Success. This is in line with national trends showing fewer people are seeking out higher education.

“Our enrollment was up three percent this fall,” she said. “We are now registering for spring and we’re hoping to maintain a three percent increase again.”

In addition to feeling anxious, frustrated and stuck, students said the exhaustion that comes with financial stress has been difficult to handle. This conversation is coming up more and more among friends and family, they said.

“The exhaustion that comes from it, I think, is overlooked,” Obermiller said. “It’s bringing down your mental health because you don’t have the time to just recharge. It’s terrifying but it’s kind of like ignorance is bliss.”

The students said they are looking to politicians as a source of potential change. The opening of President Joe Biden’s loan forgiveness application is a step in the right direction, despite being blocked by a federal judge in Texas.

Administrators at St. Paul College said they too are aware the current financial aid system could use improvement and leaves gaps for students to fall through.

Gomez, who earns too much to be considered for grants while relying on loans and emergency funding to pay tuition; Rengifo, an international student; and Alberg and Obermiller, who are spending more time on work and less on classes, are just some of many students being impacted.

“Having that empathy and understanding that going to school right now is difficult, is very important,” Alberg said. “Asking for extra help and finding resources, it’s not really a sign of weakness, it’s more saying that I want to learn, I want to get my education.”