By land or by water, Austin’s Cabeen brings grit and leadership 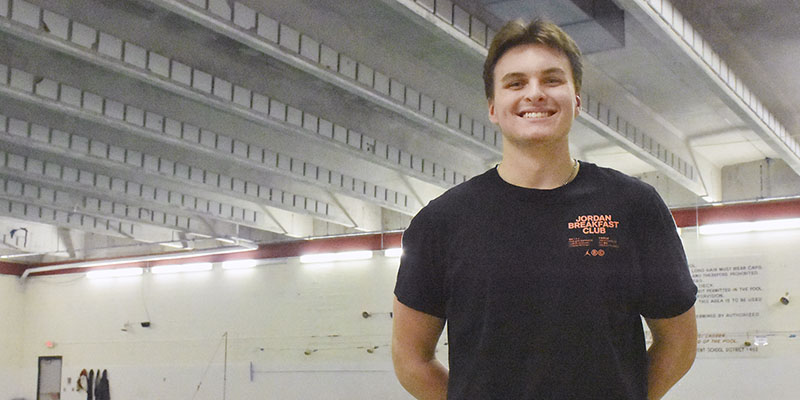 Austin senior Kenny Cabeen is taking on a leadership role with the Packer swimmers this winter. Rocky Hulne/sports@austindailyherald.com

In his time as a Packer, Austin senior Kenny Cabeen has been as mean as a snake in a pit, and as driven as hard as  a work horse pulling a sleigh.

Cabeen recently wrapped up his time as a lineman for the Packer football team and now he’s making a splash in the pool, where he is one of the top swimmers for an Austin team that has a lot of youth.

Cabeen has been swimming since he was in second grade, but the sport hasn’t gotten any easier for him over the years.

“Just about every swim practice since football I was about ready to throw up afterwards,” Cabeen said. “This is one of the hardest sports I’ve ever done. For the kids who stick with it, they are very dedicated.”

Life in the trenches can be tough for anyone who has lined up at the point of attack on the gridiron, but life in the water is equally challenging in a different way.

“The mentality for football is that you want to go hard every time,” Cabeen said. “Swimming is a little different because you have to focus on your stroke, you’ve got to change your body and what you eat.”

Cabeen was a state qualifier in the pool last season and he’s hoping to get back to state and come through with a podium performance this year. He also has a goal of swimming on two relay teams at state.

Austin head coach Ryan Kelly said he’s had a few swimmers who also played football in the past, but Cabeen’s talent is unique as he has grown into a speedy swimmer.

“He’s come a long way,” Kelly said. “He shot up early growth wise and his muscles had to catch up to him. His strength has caught up to him and he’s blossomed a lot. Kenny has really become a different swimmer since he’s gotten stronger.”

Cabeen is embracing the leadership role as a senior, along with his longtime teammates and fellow seniors Winston Walkup and Joey Hilkin. He’s excited to be among the group of many Packer greats in the past who have paced the team in practice and on meet days.

“I grew up looking at leaders like Trey Myers and Logan Kelly. I learned from watching those guys and I learned how to motivate the team,” Cabeen said. “I like this team and I like the depth we have. We have a lot of young guys and Winston, Joey and I are the guys who have been around.”

Austin will host Rochester Century in a dual at 6:30 p.m. Thursday.