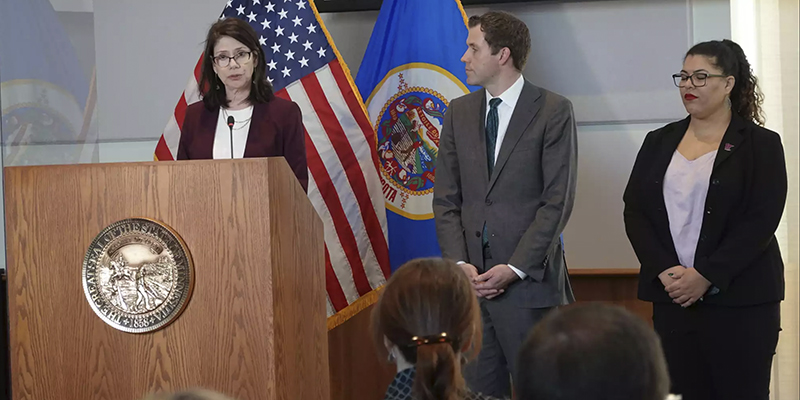 A bonanza of budget ideas was blooming at the Minnesota Capitol after word of a massive $17.6 billion surplus came from state finance officials.

Many of the ideas came from the person who will have the final say over how to spend the money: DFL Gov. Tim Walz, who was downright giddy as he reflected on the astounding surplus estimate Tuesday.

“Oh by the way, the Vikings are 10-2. Look at that. Pretty good day. And no strike,” Walz said, referring to tentative agreements between hospitals and union nurses. “So good work.”

The governor’s victory lap might be understandable, given the past few months were filled with campaign critiques of his stewardship of the state, including its finances.

Now he’s on the doorstep of a second term, has lots of money to work with and can count on newly empowered DFL allies in the House and Senate. Voters, he said, want results.

“So I think there should be some relatively high expectations that this is an effective legislative session that addresses the issues most important to them but also has a vision around addressing the big issues like climate change and health care access,” Walz said.

There is no shortage of plans on the governor’s to-do list.

“I’m excited,” he said. “Now’s the time to lower costs for families, now’s the time to reduce and get some money back in their pockets. Now’s the time to make sure that those classrooms are funded with the things that they need to do to make our kids the best qualified workforce in the world.”

The surplus will enable much of it. It’s based on stronger-than-expected tax collections and lower-than-anticipated costs.

Still, state economic experts added a note of caution to the general optimism.

“Obviously there are a lot of things about the economy that are uncertain right now,” State Economist Laura Kalombokidis said, cautioning that the 31 months the forecast covers is a long lookout.

Not all of the money is in the state’s permanent revenue stream, so items that have a one-time cost without ongoing expenses could rise to the top.

The Legislature will play a big part. New House Majority Leader Jamie Long, DFL-Minneapolis said many of the priorities of his caucus overlap with what Walz wants.

“And now this projected budget surplus means we can respond to Minnesota’s needs and deliver results,” Long said. “Far too many Minnesotans are living paycheck to paycheck. We are in the midst of the housing crisis in our state. Schools are laying off teachers and staff. Employers of all sizes are facing hiring challenges and asking for support with childcare, transportation and other workforce needs.”

But Long added that it’s premature to commit to specific details, including the Walz rebate plan. Incoming Senate Majority Leader Kari Dziedzic, DFL-Minneapolis, wouldn’t give an outright blessing either ahead of an upcoming caucus retreat.

“We will be discussing priorities in more detail this weekend,” Dziedzic said. “And he can propose this budget and we will have a thorough conversation and probably some hearings on the issue.”

Dziedzic said there’s enough common ground, including with Republicans, to reduce the gridlock that’s consumed the Capitol for years.

“We will be strategic and thoughtful and as the governor said, we’re going to look at, are there ways that we can do things better? What is the best way to do this? I think we will be thoughtful, strategic, and figure out what’s the best way to help Minnesotans – and have a budget.”

New House Minority Leader Lisa Demuth, R-Cold Spring, said her caucus wants to find compromises, but won’t look kindly on anything that raises taxes or costs for household necessities, such as heating bills.

“I think there are so many times that we agree more than we disagree. That’s where our focus is going to be,” Demuth said. “Where we can work together, we will. If there are provisions that are concerning that we don’t agree with, we will definitely make those loud, too.”