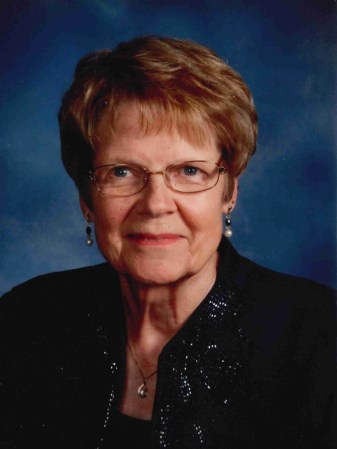 Betty was born April 14, 1933 to George and Myrtle Hoppin in Dexter, Minnesota. She graduated from Elkton High School in 1950. On June 2, 1951, Betty married William F. Rabine at the Dexter Methodist Church.

After graduating from high school, she was employed as an insurance underwriter in St. Paul before moving back to the Elkton area. She was secretary and bus driver at the Elkton School before attending Austin Community College and Winona State University.

In 1970, Betty was employed by Bowlby, Anfinson CPA’s (BACH) as an accountant and office administrator. After the merger with Larson, Allen CPA’s (LAWCO) was completed, she retired April 30, 1994 and moved to Fifty Lakes, Minnesota. Bill and Betty returned to Austin in 2000 to be near family.

Betty was baptized at Grand Meadow Methodist Church by Rev. Velte, and in 1945, was confirmed into the Dexter Methodist Church by Rev. De Dourcy. She was an active member since that time and served as choir director, Sunday School Superintendent, Caring Ministries, Prairieland Parish, Staff Parish Relations Committee, and other church committees and activities including being the greeter at the annual turkey suppers. Betty served 63 years as the church organist.

She was past president of Austin Area Zonta Club, was a member of the Hormel Historic Home, Mower County Senior Center, past matron and organist of Unity Chapter Order of the Eastern Star in Austin where she was recognized as a 50 year member in 2003.

Her retirement days were spent caring for and visiting friends and family, playing in several card clubs, and traveling, including many parades and trips with the Austin Oriental Shrine Band.

A funeral service will be held at 11:00 a.m. on Wednesday, January 4th at Dexter United Methodist Church with the Reverend Jon Marburger officiating. Visitation will be at Clasen-Jordan Mortuary from 5:00 to 7:00 p.m. on Tuesday, January 3rd and at the church Wednesday morning one hour prior to the service. Interment will be in the Dexter Cemetery.

Memorials are preferred to Dexter United Methodist Church or to Homestead Hospice.