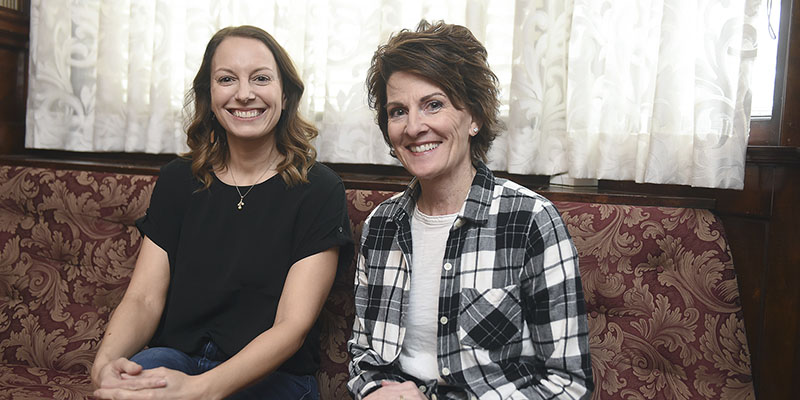 Mary Barinka, right, and Beth Tobak are photographed in the Hormel Historic Home. At the start of the new year, Tobak will take over from Barinka the title of Community Autism Resources Specialist for Autism Friendly Austin. Eric Johnson/photodesk@austindailyherald.com

For over 10 years, autism programming has been a valuable and growing resource based out of the Hormel Historic Home.

Involved from the beginning has been Mary Barinka, who’s own daughter Meg took part in that same programming. Now, with the new year approaching, Barinka looks back at just how much of a staple autism programming has become through Autism Friendly Austin as its Community Autism Resources Specialist.

At the same time, Beth Tobak looks forward to becoming just the second person in the role for Austin Friendly Austin.

“I’ve already said this to Mary,” Tobak said Wednesday, sitting down with Barinka at the HHH. “She paved this beautiful road in the community of amazing programs and I don’t plan to change the path at all. But I plan to plant some trees along the way.”

Barinka was one of the  principle personalities in getting the programming started in Austin. Starting with Circle of Friends in 2010, the camps and the opportunities for those with autism and their families has grown exponentially.

It all began with a $5,000 seed donation from Pat and Gary Ray. That money came at the same time as the HHH was preparing for and building its addition. A question was asked during a larger conversation on how the space would be utilized.

“Pat said, ‘if Gary and I made a small donation of like $5,000, would you start a camp for kids with autism?’” said Barinka, who was officially named to her position in the fall of 2017.

For years Barinka had experience advocating for her own daughter, putting her in a prime opportunity to use those experiences to help develop a program, at first as part of the Autism Friendly Austin Advisory Committee.

“At the time, my daughter was about five, six maybe,” Barinka said. “I explained to her, opportunities for her were in Minneapolis. Or it would take  me calling the coach or the teacher or whomever and give them the background of what her needs were.”

Circle of Friends began the process of opening those doors. With each door the experiences became more numerous. Also during the 12-year life of Austin Friendly Austin, Barinka came to know Tobak.

Tobak has actually spent two stints in Austin. It was her family’s second trip back when she really threw herself into programming.

“Beth was involved with my daughter and I knew she had experience with autism,” Barinka said. “When they moved back to town she was very active with the volunteer committee.”

Tobak has extensive experience in counseling and brings a strong background in mental health care. However, during several moves, Tobak began working outside her field.

“In some of those moves I sought jobs outside of counseling,” she said. “One of the jobs took me into the world of autism and I became a behavior specialist consultant.”

As part of her work with the Austin Public Schools District, Tobak wrote out behavior plans for schools and families to carry out for kids with autism. Tobak said that during her time, she has become passionate about working with people on the autism spectrum.

“We really wanted to make our community autism friendly,” she said. “We wanted to implement some of those things here. We’re fortunate to have the types of programs we have here, especially for the autistic community. This is not a common thing to see in other places.”

Despite the remarkable growth of Autism Friendly Austin and its partnership with the Hormel Historic Home, Tobak sees room to still grow and she wants to use her background in mental health to help facilitate that continued growth.

“I think it’s going to be hugely beneficial,” Tobak said. “We’ve heard so many families say they just need support; a listening ear. Their kids sometimes, friends and peer relationships are an issue and so they go through depression. Just like everyone else they have anxiety, they have all of these things they are dealing with that I have a background in.”

Looking ahead, Barinka sees Autism Friendly Austin continuing to succeed by helping those with autism succeed under Tobak’s leadership.

She knows this by how much success the program has already had with Tobak being involved and both women know how impactful Autism Friendly Austin has been.

“Hugely transformational speaking from personal experience,” Barinka said. “Going back to what we started talking about, there wasn’t an opportunity for parents to sign their child up and drop their kid off for a summer activity where they knew their child was understood and supported and pretty much could guarantee they were successful.”

And Tobak recognizes just how much Barinka has been a part of that as well as looking forward to what she can add.

“Not everyone could have taken it this far in five years,” Tobak said. “I am excited to add a little bit of myself in the role with a mental health background. I love working with kids with autism and adults with autism. I see that passion coming back in me. I’m excited to move forward with it.”

The experience has certainly left a mark on Barinka.

“It’s so rewarding and it’s never the same thing. Every day is different,” she said. “We’ve all worked as a team. A real definition of community. This is Austin I think. It’s not every community. We are special here.”