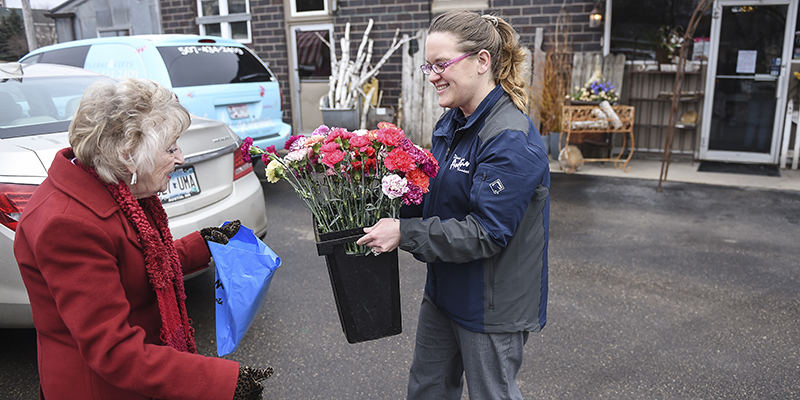 By now you have probably seen Petunia — the pink VW bug painted to look like a pig. Or maybe you were at the Governor’s Pheasant Hunt in 2019 when Austin hosted it.

Or, Maybe you are even visiting as part of a weekend-long hockey tournament. Either way, you’ve experienced something of what Austin has to offer and heading up the work to shine the community’s star like a beacon is Discover Austin Executive Director Nancy Schnable.

A transfer from the hotel side of the hospitality world, Schnable came to Discover Austin in July of 2013 when it was know more commonly as the Austin Convention and Visitor’s Bureau.

While both sides are a part of the tourism industry, becoming director of Discover Austin offered Schnable more flexibility.

“I love tourism and I love being able to help people,” Schnable said. “This gave me the opportunity to spend more time with my family.”

However, at the same time the prior experience of managing a string of five hotels in Rochester gave Schnable valuable insight in how to start blowing Austin’s own horn.

“In hotels, we welcome groups for a particular hotel,” Schnable explained. “Working in conventional and visitors bureaus, I get to promote all the hotels and welcome all the visitors.”

“Every day I feel so blessed I get to do what I love and then come home and be with my family.” — Nancy Schnable

Admitting there was something of a learning curve, Schnable jumped all in and was able to ironically build on the welcoming nature of Austin itself.

This support system allowed her build her own set of goals for the future of Austin that worked both for the community as well as for those wanting to experience the community.

“The goal was just to increase the economic impact of the community,” Schnable said of those early years. “It’s also a resource for the community. The goal is to bring people in.”

The job is made a little easier by just how much there is in Austin.

On the surface there are the well-known stops: The Spam Museum, the Hormel Historic Home, the Jay C. Hormel Nature Center.

But it was the other amenities that have become destinations for conventions and tournaments.

“A lot of people outside of Austin in general didn’t know how incredible our facilities were,” Schnable said. “Again, the awareness of letting people know what we had. We really promoted those. You can host an event here.”

By working closely with local partners, which includes businesses and volunteers, Discover Austin has created a vast network of resources to make people aware of the destination that is Austin.

At the same time, there is a certain level of promotion that has been launched by Discover Austin that Schnable has said required just a little extra thought.

“Sometimes you just need to think outside the box,” she said.

That of course, includes Petunia, which has gone all over the Midwest to events like the Sturgis Motorcycle Rally on a mission to tout Austin.

It also includes a 53-foot semi-trailer with a wrap of Austin images that continues to traverse the nation and drawing attention. The trucking company each month sends a report back to Schnable, alerting her to where the trailer has been.

It’s a little bit of extra fun to compare that report to the calls she receives on a daily basis.

“Whether they come here for leisure or a tournament or convention or look at it as a place to retire to, it’s just putting Austin on the map,” she said.

Over the nearly 10 years Schnable has been in charge of Discover Austin, the organization has seen a large amount of change from a new location to new staff. But it all has the same mission. Bringing people to Austin.

Events like the Governor’s Pheasant Hunt are all important to a thriving community.

“Any visitor creates a wonderful economic impact,” Schnable said. “It’s kind of that long lasting impact they will talk about. Their experiences in Austin. This year the hunt was in Worthington and people were still talking about being in Austin in 2019. It’s a great impact.”

Schnable hinted that there were some new big things on the horizon, but until then she’s just enjoying her experience so far at Discover Austin.

“It’s amazing. It’s incredible,” she said. “Every day I feel so blessed I get to do what I love and then come home and be with my family. It’s been incredible.”