Women in Business: ‘It’s just the best job ever’ 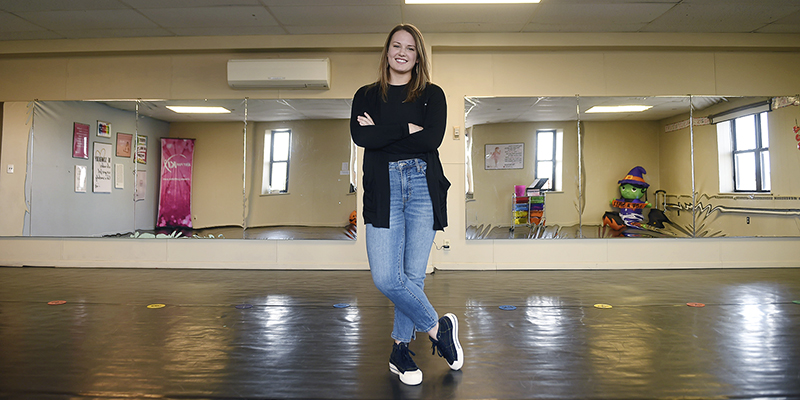 Madeline Deyo stands in the dance studio of Just For Kix at St. Olaf Lutheran Church. Deyo has taken over the studio after the retirement of her mom, Marni Rohr. Eric Johnson/photodesk@austindailyherald.com

Madaline  Deyo was once part of one of the most prestigious dance teams in the State of Minnesota, competing with the Austin Packer Dance Team when in high school.

It was part of a passion for dance that began when she was just three-years-old.

These days she continues to celebrate and share the world of dance, but as an instructor and as owner of Austin’s Just For Six Dance Studio.

“I was an assistant for the younger classes for my mom and a lot of the other instructors,” Deyo said. “And then, after have I graduated, I lived in Stewartville and taught for the Stewartville Just For Kix program, the one in Rochester and Austin to kind of see if it’s what I wanted to do. Then I knew it was right.”

Deyo took over the business from her mom, Marni Rohr, who continues to teach under her daughter, but who is otherwise retired.

It’s proven to be boon. 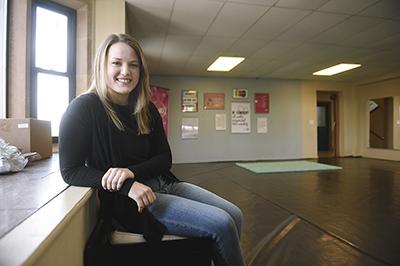 “It’s weird, because as much as I loved dancing, I love coaching even more and I knew that was kind of where I wanted to land.” — Madaline Deyo

“It’s so helpful. I feel so lucky,” Deyo said. “I call her weekly just to talk. There’s not a lot of people who do dance and you feel kind of isolated. Just to have someone with that much knowledge right on my phone … you have to use it. Plus she has really good advice.”

Deyo said she thrived on the energy dance creates, both from the activity itself, but also from the crowd’s enthusiastic cheers.

“It’s artistic and it’s physical and it’s mental and you’re just able to have so many people around you,” she said. “A lot of sports, as you get older, there are only five people playing at a time, but when you’re actually competing and performing there are 30 people around it. It’s that energy and the cheering … there’s nothing like it.”

As much as Deyo thrived in the atmosphere created by competitive dance, she found herself being pulled more steadily toward the coaching side of it.

As she continued to coach more and more, she found her enjoyment laid out more in the instruction than the dance itself.

“It’s weird, because as much as I loved dancing, I love coaching even more and I knew that was kind of where I wanted to land,” Deyo said. “I love kids. Coaching is different. I loved performing, but kind of behind the scenes of it and being able to create is just different.”

Deyo found herself thrilled by the hands-on aspect of coaching, something that was dulled somewhat during the heaviest days of the COVID-19 pandemic.

“We went totally virtual, like most people had to do,” Deyo said. “Teaching alone in the studio with Zoom and all of that stuff. We had it when we could, limited classes. We did what we needed to do.”

But dance is about expression and it’s hard to convey that over a computer screen.

“Part of the fun is being in a group, a class setting with multiple people that care about dance like you and being hands-on with the coach,” Deyo said. “Even as a coach, it was hard to know where the kids were at because you kind of feed off their energy.”

These days, Just For Kix and its over 300 dancers are able to dance full time and keeps Deyo’s calendar full.

It’s a chance to not only focus on the technicalities of dance, but it’s also a place where kids can be kids and embrace both sides of the experience, something Deyo said can make chunks of the day disappear.

“It’s so rewarding and fulfilling,” she said. “When the kids care about what they are doing and genuinely want to get better, the whole atmosphere flies by and I forget what time it is. All of a sudden it’s 10 p.m. at night and it’s ‘oh my gosh, I need to get home.’”

But Deyo wouldn’t have it any other way, simply because of the kids themselves and the opportunity she and the other coaches have when they see everything start coming together.

Often it’s the kids themselves setting up that atmosphere.

“When the kids come in their happy to be here, they’re smiling,” Deyo said. “We let them be kids and be a little bit crazy and get back to discipline and focusing on our technique. It’s just the best job ever.”

Not that the process is without challenges. The age range for those dancers at Just For Six is 18 months to 18 years. It’s wide span of ages at different levels and engagement.

“As they get older it gets more competitive,” Deyo said. “It’s trying to keep the balance between those who want to state competitive and those who want to keep with the fun, laid back atmosphere. That’s kind of the biggest challenge and making sure they understand all of the different styles.”

Deyo said she want’s to continue to see Just For Six grow, but not just in numbers. She wants to see the studio become more encompassing.

“I would like us to get more diverse,” she explained. “Reach out to other communities to represent Austin just a little bit more. The more people that get in here the better because it’s a positive place for kids and I think we’re doing a lot of good.”