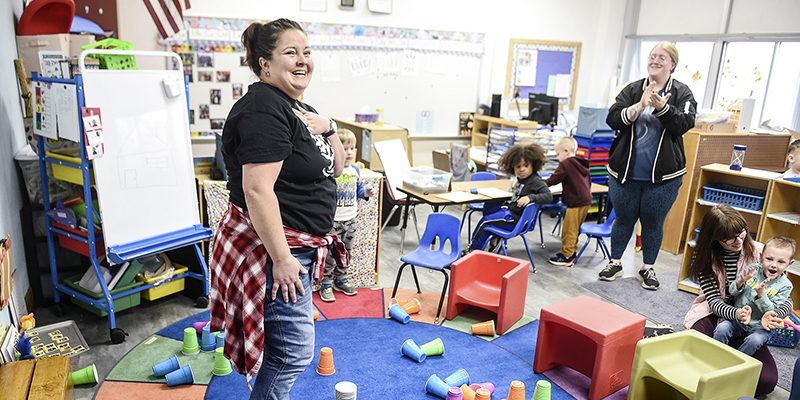 Heather Ruzek reacts as it was announced that she was this year’s Austin Public School’s Teacher of the Year Wednesday afternoon at Neveln Elementary School. Eric Johnson/photodesk@austindailyherald.com

That was about all Heather Ruzek could say as she stood at the front of her Neveln Elementary classroom Wednesday morning among her colleagues, school administration, friends and family.

The visibly stunned and smiling early childhood special education teacher was named this year’s Austin Public Schools Teacher of the Year Wednesday. It was a surprise she didn’t see coming.

“I went numb because I’m never surprised because I don’t like surprises,” said Ruzek, who has been a teacher for 17 years. “This is a good surprise. I can’t believe my family was able to keep such a big secret from me.”

Ruzek was one of 21 teachers up for the award this year and it was her work with APS’s youngest students that really brought her to the forefront.

“She’s fantastic,” said Teacher of the Year Committee Chairman David Brown. “She takes care of the youngest treasures in the district.”

The class that Ruzek teaches was one of many pre-kindergarten classes that needed to move just days into the new school year after the district was forced to close the Community Learning Center at Queen of Angels Catholic Church because of a bat infestation.

Brown said that the resilience that Ruzek and other teachers showed, was another bright point in picking her for the honor. 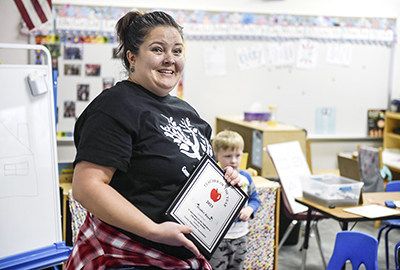 Heather Ruzek shows off her 2023 Teacher of the Year plaque after she was honored Wednesday morning at Neveln Elementary School. Eric Johnson/photodesk@austindailyherald.com

Ruzek will now join other teachers from around the state to compete for the Minnesota State Teacher of the Year.

Semifinalists will be chosen sometime between January and March, with finalists being selected sometime in March and April. The overall winner will be selected toward the end of May.

Last year’s APS Teacher of the Year, Banfield Elementary third grade teacher John Schneider, reached the semifinal round and Marsha Wilson, another Banfield teacher, was a semifinalist in 2017. The highest an Austin teacher has ever fared in the competition was when current school board member Katie Ulwelling was named as a finalist in 2000.

“It’s such an honor and in a district that is so strong like this, to be that one this year — I’m speechless about it,” said Ruzek, who grew up wanting to be a teacher. “I hope I can represent our district as well as our program.”

At the same time, Ruzek is also hoping to represent the profession as well.

“I guess that I just love doing my job and wanting to represent how important early childhood is and this helped do that,” she said. “I hope this also gives credit to those people who do what I do.”