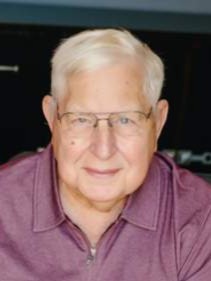 Robert “Bob” J. Juhnke, age 87 of Lansing, MN, passed away peacefully on November 10th, 2022. Bob was born April 13th, 1935, in Udolpha Township to Walter and Florence (Frohreich) Juhnke. He was raised on a farm in the Waltham, MN area. He was baptized and confirmed at Trinity Lutheran Church in Waltham, MN. Bob attended Austin High School. He entered the Marine Corps and served from 1954 to 1957 and was deployed to South Korea.

He was united in marriage to Joan Marilyn Wahlers on November 10th, 1962, at Holy Cross Lutheran Church in Austin, MN. They spent 60 years together in Lansing and raised three children. He worked at the grain elevator in Lansing for over 40 years where his good nature and gift of gab made him well-liked. He loved the MN Twins, bowling, snowmobiling, fishing, but most of all he loved his family and just about everyone he met. He loved to go camping with his family and friends up north and later in life at a family cabin with his children and grandchildren. He was a gentle father and a kind man and taught his kids the importance of family. He was proud of his service to his country and enjoyed camaraderie with fellow vets. Bob made the world a better place through his kindness, his laughter, his love, and his smile. Although, he had a long life, it was not long enough. We wanted more years with him and will always miss him.

Funeral Services are planned for 1:00 p.m. on Wednesday, November 16th, 2022, at Worlein Funeral Home Chapel in Austin. Visitation will be held from 11:00-1:00 p.m. prior to the service. Interment will be in Lansing Cemetery. Worlein Funeral Home of Austin is assisting the family with arrangements. Condolences may be expressed to the family online at www.worlein.com.