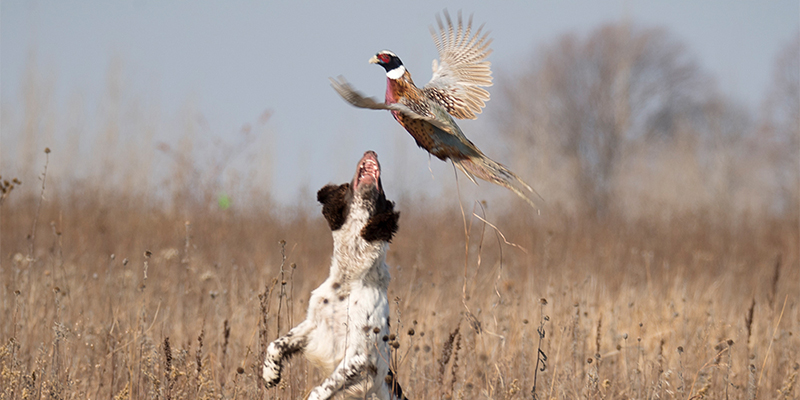 A dog leaps for a pheasant during a past 2022 National Open Championship for English Springer Spaniels event. Photo courtesy of Photography by Geeb • www.geeb.net

If you’re a hunting enthusiast or just a fan of dogs, then find yourself some blaze orange. 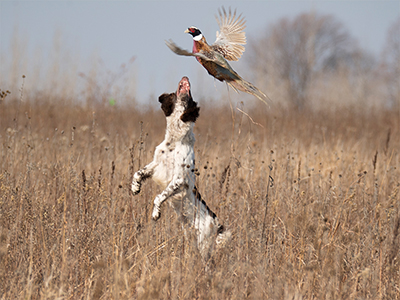 A dog leaps for a pheasant during a past 2022 National Open Championship for English Springer Spaniels event. Photo courtesy of Photography by Geeb • www.geeb.net

The five-day event, which has been going on for over 60 years, will feature dogs and their handlers from across the United States and Canada, who will be put through trials both on land and in the water with the winner being crowned the 2022 National Champion.

“Spingers are just a joy to watch in the field,” said this year’s president Mike McGinty. “Many people will tell you that if they couldn’t go hunt with their dog they might not hunt.”

The public is invited free of charge to watch the trials, though to do so you must be wearing blaze orange for safety. The land trials will be taking place at 24660 900th Avenue with the water trials slated to take place at East Side Lake.

McGinty said that in order to be crowned national champion, handlers and their dogs must complete five land series and two water series.

The water series requires the dogs to retrieve a “bird” that has been launched over the water. A blank shot will go off and the dog will retrieve. They will have to do it a second time. 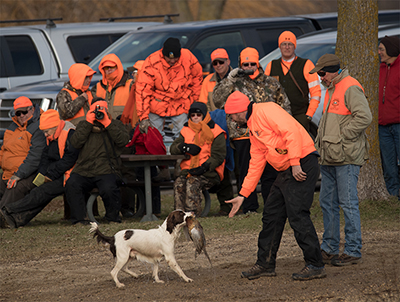 A dog returns a bird to its handler during a past 2022 National Open Championship for English Springer Spaniels event. Photo courtesy of Photography by Geeb • www.geeb.net

The land series will use live pheasants, which will require the dogs to find and flush two birds and assuming the birds are downed be the handlers, the dog will then need to find and retrieve the bird.

“You get a chance to see a lot of birds being worked by dogs,” McGinty said. “It’s really exciting.”

The birds that are harvested will go to the Geneva Game Feed Association, which will use them for their wild game feed dinners.

McGinty said that so far 130 dogs have been entered, but the number of dogs actually competing will be closer to around 120.

All dogs will start in the first series. Any dog that commits what is called a cardinal sin, such as chasing the bird after it’s flushed, failure to retrieve or flushing another dog’s bird will not be asked backed.

All others will advance to the next three series where the judges will begin looking at the dogs and compare what they are seeing with each other.

“They will decide who they want to look at in the fifth series,” McGinty said.

Trials will begin at 8 a.m. and run to 4:30 p.m. most days except Monday. People will also get a chance to interact with hunters.

McGinty said there are a couple things that make the dogs so popular and they will be on full display this weekend.

“There’s actually two facets,” he said. “One, they’re such great family dogs. They just fit really well with families, little kids, bigger kids, parents. Secondly, they are kind of a jack of all trades. They will retrieve ducks, geese, grouse, quail and certainly pheasants. They are perhaps the best pheasant hunting dog out there.”