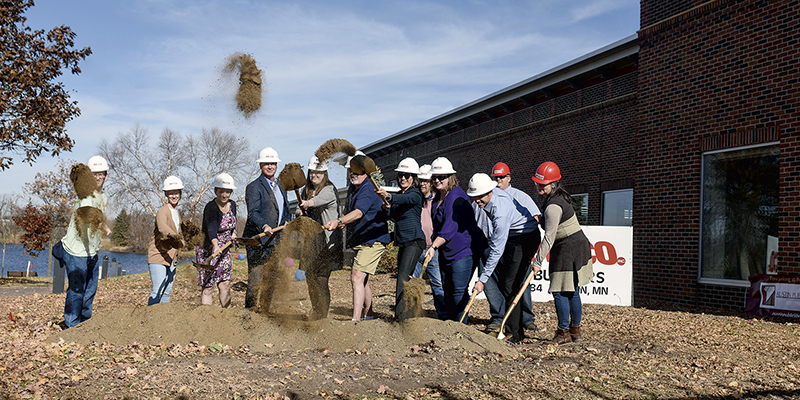 Ground was broken Wednesday afternoon for the Austin Public Library remodel, which is slated to be completed by next June. Eric Johnson/photodesk@austindailyherald.com

The project will come in at around $1,551,000 million with work progressing through the rest of this year and is projected to be finished around June of 2023. Once completed the work will include a list of improvements including a large add-on to the west side of the building as well as a major remodel to the service desk area and a complete bathroom remodel.

Talks initially began in 2017, and library officials said that it’s a relief to finally put shovels in the ground.

“It’s exciting in the sense that everything we originally planned for is still pertinent to the community,” Director Julie Clinefelter said. “I think what’s just as exciting is that programming is really going to explode, especially with the new space.”

Library Board Chair Melissa Bonorden said Wednesday’s ground-breaking also brought with it a sense of finality, and echoed what others were saying. That the library project is more than a remodel. It’s a reimagining.

“It’s fun to have a sense of completion and see things taking shape,” Bonorden said. “We’re using our space differently. We’re changing to meet the needs of the community.”

Like all projects, the library project has seen its share of challenges in reaching fruition. In many ways more so.

First, was the COVID-19 pandemic, which bogged the project down considerably.

“We lost so much momentum with COVID,” Clinefelter said in early October.

The second big hurdle was a considerable hike of the original estimate of the project, which ballooned from around $680,000 to $1.6 million.

That increase put a sizable gap between what the fundraising effort for the project had on hand. Clinefelter said at the time that they expected to go over initial estimates, just not that much.

“I’m kind of an optimist anyway and I figured we would get it done one way or the other,” Clinefelter said Wednesday. “But for two days there I thought, ‘that’s it.’”

“To have the City Council come through was really amazing,” Clinefelter said.

In the end, the library will still get everything it planned for except a canopy that would have been added to the main entrance and that would have reached out over the book drop-off.

“It’s been a learning process,” Bonorden said. “All of us understand the importance of the library to the community.”