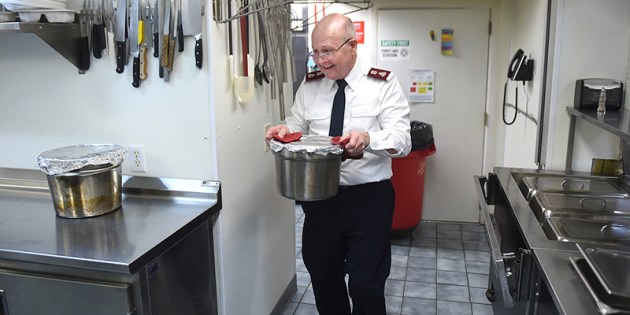 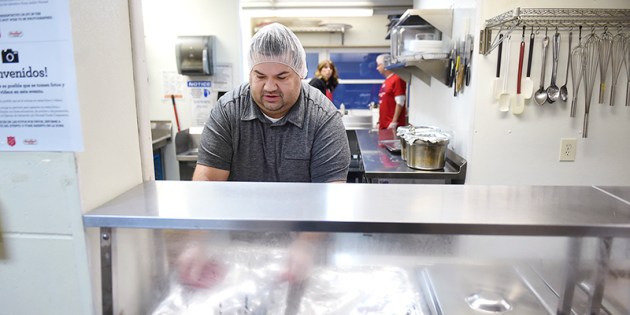 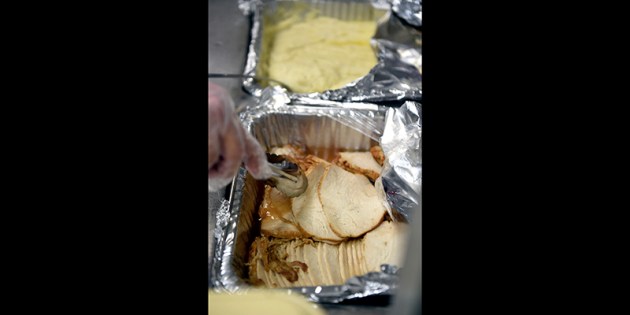 Turkey is unpackaged prior to Monday nights Thanksgiving meal at the Salvation Army. The food was provided by Perkins, one of the many restaurants and groups in Austin that have stepped up to ensure the Salvation Army’s night meals continue. Eric Johnson/photodesk@austindailyherarld.com 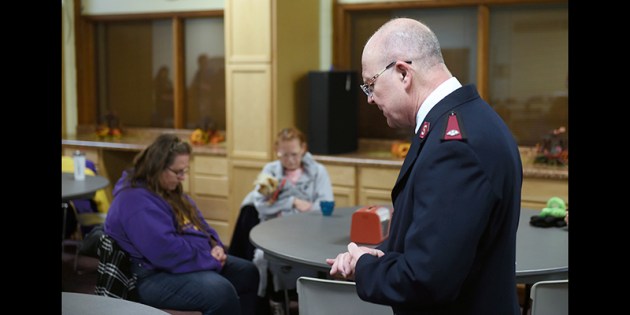 The Salvation Army’s Major Strickler leads a prayer before Monday night’s meal. The meal has been in danger of being cancelled because of staffing issues, but volunteers and groups in Austin have stepped up to ensure the meal continues. Eric Johnson/photodesk@austindailyherald.com 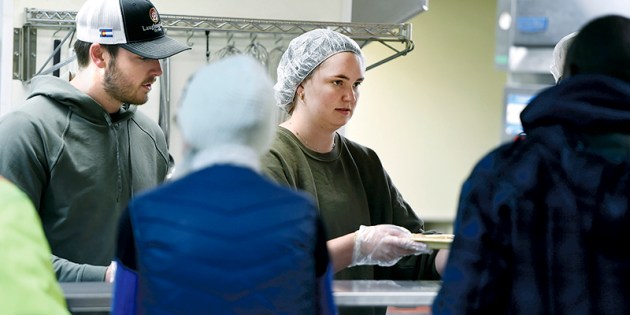 Carly Snee looks up to hand out a tray of food during the Salvation Army’s nightly meeting Monday night. Eric Johnson/photodesk@austindailyherald.com 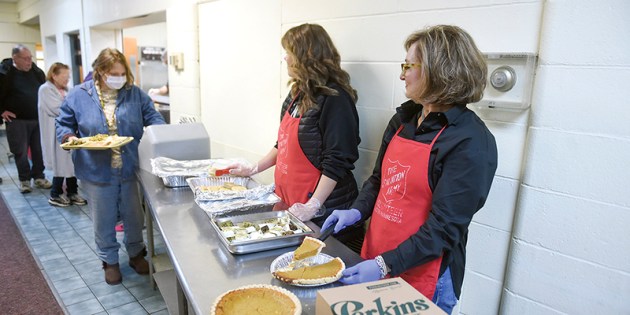 On Monday night, the Salvation Army opened its doors for its nightly meal. As the people made their way in and found their tables, small talk and conversation filled the air, both between themselves and the volunteers.

It was a warm reminder just how important the meal is to those who rely on the Salvation Army and thanks to volunteers and community groups the meal will continue on  after it was in danger of going away.

With gaps in staffing and volunteers, the Salvation Army nearly had to make the painful decision to do away with the meal, held Monday through Thursday from 5-6 p.m.

“We were facing a Christmas where we were going to be short several staff in the office,” said Major Jeff Strickler. “It was very difficult for us to try and keep up with the meal. And then Hormel Foods and the United Way of Mower County and some other groups and churches really stepped up to keep us going.”

The problem found its roots back in March of 2020, when the COVID-19 pandemic was gaining momentum in the United States. On March 26, they had a cook leave and for 28 months the Salvation Army pressed on with staff filling in where they could.

More recently, the Salvation Army hired a couple cooks, but they too left to take different positions.

“It’s just hard to retain someone,” Strickler said, echoing an frustration businesses across the United States have been coping with.

In the short term, ideas included dropping the meal, or alternating it to more of a take-out format.

That’s when community organizations and businesses stepped in to ensure the meal progressed, continuing the vital service to community members needing a meal or a place to go.

“We feel like it’s important people be in a congregate setting because loneliness also plays into the mental health aspect of just everything going on,” said Tammy Snee, who along with her husband and Hormel CEO Jim Snee are helping lead the volunteer effort from Hormel Foods. “To share a meal together is an important thing. If there is a way to make this happen, we should do it.”

The Snee’s and their family became involved through an initiative called Hometown Food Security, which joins the collaborative efforts of Hormel, the Salvation Army and the United Way of Mower County.

This work to help the Salvation Army maintain their evening meal is just another opportunity to continue that effort forward.

Strickler said that since reopening for the live meal on Oct. 1, the Salvation Army serves between 25-45 people nightly.

With that amount of people, it was going to be unrealistic for staff in their current situation to simply continue the rigors of serving the meal while tending to the Salvation Army’s other programs.

At the same time, it’s not a localized issue. United Way of Mower County Executive Director Molly Lanke said that non-profits are facing many of the same struggles nationwide and in the state.

This struggle was reflected in a report by the Minnesota Nonprofit Economy Report issued in October of this year.

“As relief funding dries up and a new normal settles in, many groups face an uncertain financial future and continued high community demand,” the report read. “While we celebrate the resilience of nonprofits across the state, the people behind this undertaking are experiencing high levels of burnout. Organizations are facing the question: How do we strategically continue to support our communities while caring for and retaining staff and remain financially viable?”

However, in Austin a quick response was able to get the ball rolling in order to support the Salvation Army and their efforts to keep the meal intact.

“We got to work leveraging our connections,” Lanke said. “Typically (meals) are being made here when there is a cook, but right now we’re getting creative. We’re bringing in some restaurant prepared meals.”

Tuesday night’s meal was furnished courtesy of Perkins in Austin, which provided a full Thanksgiving feast for diners, including turkey, mashed potatoes, stuffing, all the sides and of course, pumpkin pie.

Volunteers from both Hormel and the United Way of Mower County served the food and continued the trend of people stepping up to lend a hand. Word was sent throughout Hormel Foods and people immediately began answering the call.

“We sat down with Major Jeff and strategized over what we’re going to do and when we put out a Google document to Hormel people, they started signing up like crazy. We floated the idea around to places like Mower County Public Health and Mayo Clinic Health System.”

“The churches have been doing this in the area for a long time so that had already been taking place so they just jumped back into their places on the calendar,” Snee added.

The reality is that volunteers will always be needed to help the Salvation Army succeed. Its kettle drive has already begun and anybody wishing to volunteer should go to www.registertoring.com. They are also looking for help with their annual Angel Tree, which helps get toys to children for Christmas. Anybody wishing to be a part of that should visit https://saangeltree.org/.

What all of this does prove is that volunteers are vital to a community and the fact that people have stepped up to help the Salvation Army maintain its nightly meals is proof of that.

“There’s always an answer, whether that be volunteers, whether that be financial resources,” Lanke said. “I think a lot of times when people think help, they think of money. That’s not the case. This is an example of the Human Resources that made all of the difference. You need to mobilize the volunteers.”