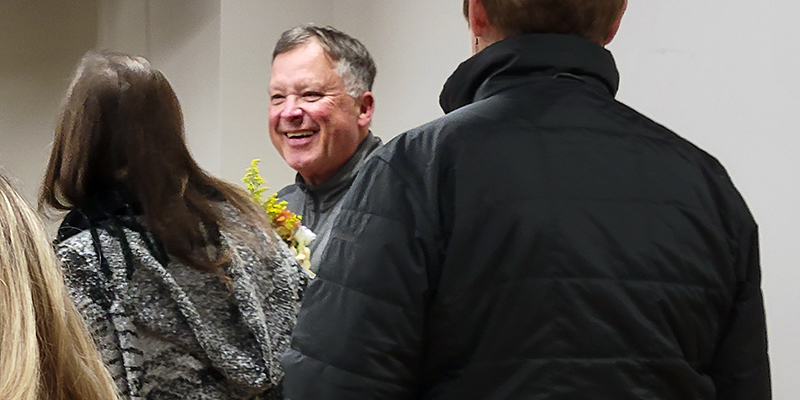 Longtime Austin Schools Board member Don Leathers smiles as it was announced that he had been named to the Minnesota School Boards Association’s (MSBA) All-State School Board Monday night during the Austin Public Schools Board Meeting. Eric Johnson/photodesk@austindailyherald.com

The announcement came during Monday night’s School Board meeting and was announced by Board Chair Kathy Green.

“There are up to seven people selected each year out of thousands statewide,” Green said during the presentation. “His resume and application looked absolutely spectacular. It’s well deserved.”

Leathers has been a member of the APS Board for 10 years and before that had a career as a teacher. He now joins Green, who is a past recipient of the honor.

The award was started in 1971 and is designed to recognize, “school board members who are committed to student achievement, determined to build support for their local schools, and unwavering in their pursuit of what’s best for students,” according to MSBA Executive Director Kirk Schneidawind.

Recipients of the award are nominated by superintendents, fellow board members or the community. Criteria for the award includes MSBA training, strong leadership, and a demonstration of concern for students, staff and the community.

“I guess I have to go to the conference now, huh?” Leathers joked.

He will receive his award on Jan. 12 at the MSBA winter conference in Minneapolis.