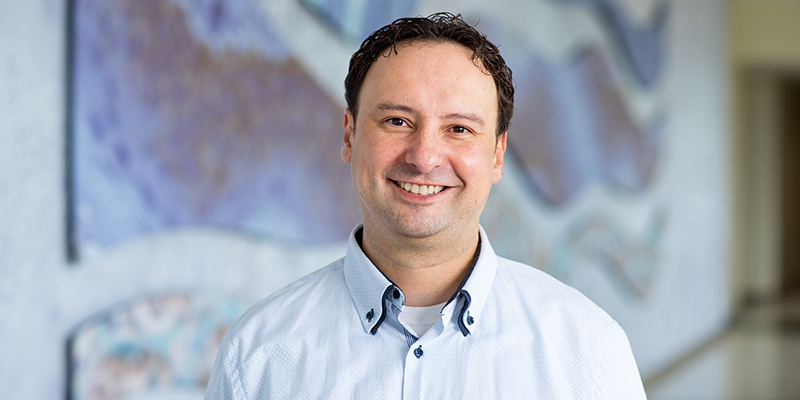 The Hormel Institute’s Rafael Contreras-Galindo, PhD, assistant professor and leader of the Genome Instability and Chromosome Biology research section, has received a grant titled “Centromeres and Ovarian Cancer.” The two year, $400,000 R21 grant was awarded by the National Institutes of Health (NIH).

Contreras-Galindo’s research is related to the Human Genome Project, a project led by an international group of researchers looking to comprehensively study the DNA (known as a genome) of human populations. As part of this project, researchers uncovered the missing pieces of the human genome, called centromeres. Centromeres make up the centrally located DNA sequences of all human chromosomes.

“My lab has made further steps in centromere research, discovering that centromere DNA sequences in specific chromosomes are markedly deleted in ovarian cancer cells, suggesting that centromere mutations are associated with this disease,” Contreras-Galindo said.

Ovarian cancer ranks fifth in cancer deaths among women, accounting for more deaths than any other cancer of the female reproductive system. This year alone, nearly 20,000 women will be diagnosed with ovarian cancer and nearly 13,000 will die from the disease. Contreras-Galindo is hopeful this research will lead to a better understanding of what causes this deadly disease, eventually leading to new treatments.

“We will be using cutting-edge technology to modify specific centromere DNA sequences in normal fallopian tube epithelial cells, the origin of most ovarian cancer. This will allow us to gain insight into the role that centromere mutations play in ovarian carcinogenesis,” said Contreras-Galindo.

This grant was awarded by the National Cancer Institute, one of the most competitive grants of the National Institutes of Health.  Contreras-Galindo is a member of the Genetics Mechanisms of Cancer division of the Masonic Cancer Center and the Ovarian Cancer Supergroup at the University of Minnesota.