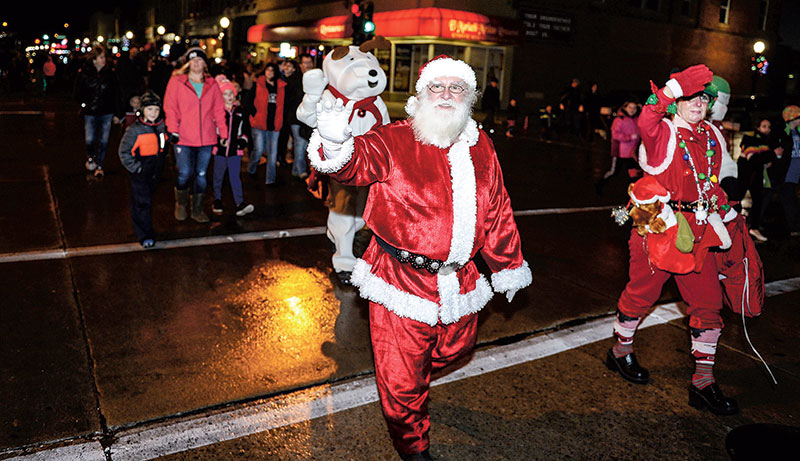 Santa Claus waves to people as he passes on the way to the lighting ceremony for Christmas in the City in 2017. Santa will return for Hometown Christmas. Herald file photo

It truly can be said that a rose by any other name would smell as sweet.

That’s the general feeling of this year’s re-imagining of Christmas in the City into a Hometown Christmas.

The event, now organized and run by the Austin Enhancement Group, will take place on  Friday, Nov. 25.

AEG, the same group that took over and brought back Freedom Fest this summer, is planning an event that many people will recognize from year’s past.

“There are aspects of the event that we know and love and we think are great,” said Mark Bliese, one of the organizers behind AEG which also includes his wife Taylor. “Whenever you inject a new way of thinking into an event like this, you get some ideas that might be a nice change.”

Families and kids will once again be able to walk with Santa Claus down Main Street with songs from the Austinaires. Paul Pruitt will emcee events once again and favorites like horse-drawn wagon rides, Kaptain Kirby’s Train Rides and pictures with Santa will all be available.

However, there will be subtle changes, including a repositioning of the stage to the plaza area next to the Spam Museum, which AEG organizers are hoping to utilize more than in years previously.

While organizers admit this year’s event will look very similar, they also hope that this will just be the first step to a growing event.

“The changes we envision will happen subtly and over a period of time,” Taylor said. “It’s hard to initiate those in a short period of time.”

At the same time, organizers say that taking over the event from the Austin Area Chamber of Commerce was a no-brainer. It’s a strong tradition that needs to come back, they say.

“It’s very important. It was critical,” Mark said. “We were very disappointed as was everybody else, but everyone understands why this event was canceled in 2020.”

Not only is it a chance to bring back a hallowed tradition that generations remember, organizers also feel that it’s the community thing to do.

“I think it’s important when you see a need and you have a question about something like that that you step up and be a part of the solution,” Taylor said. “We didn’t want to miss it so we decided to step in and do it.”

The event will run from 5-8 p.m. Nov. 25 with the walk down Main Street kicking everything off.

“I feel like the ‘Hometown Christmas’ name itself embodies the feeling we want to convey,” Taylor said. “There is a lot of things that small towns do better than big cities and I feel this is one of those. Just like the Fourth of July, we couldn’t imagine not having that.”