Home Den: Trio of Bruins have big ties to Austin 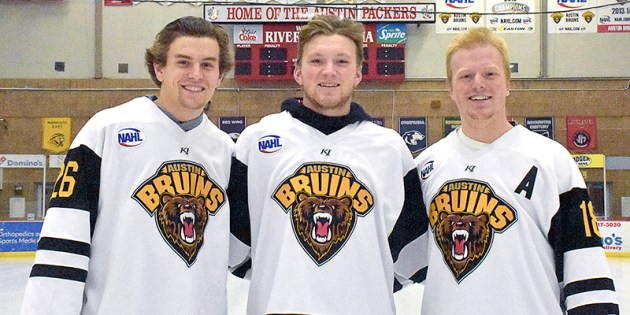 The Austin Bruins have received a boost from three players with local ties this season. From left, Dylan Cook, Adler Johnston and Nate Looft are all new to the Bruins but familiar with Austin. Rocky Hulne/sports@austindailyherald.com 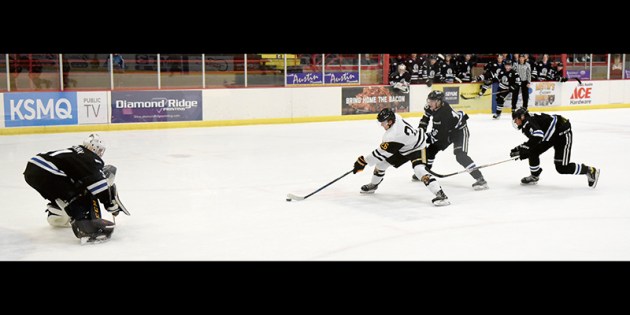 Dylan Cook attacks the net for teh Bruins. Photo by Lainie Tufte 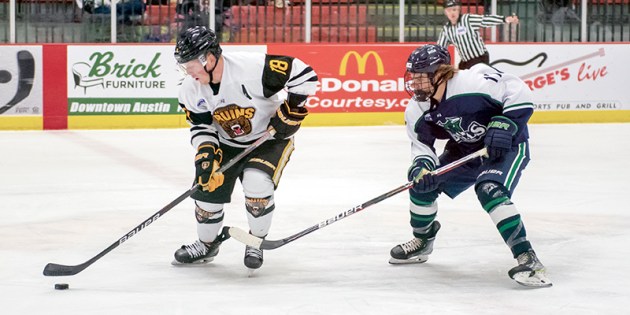 It wasn’t that long ago that Adler Johnston was a wide-eyed youth sitting in the stands at Riverside Arena during Bruins games and now he’s on the ice with the team he once cheered for.

Johnston played games in Austin throughout his time in youth hockey and he also attended Bruin camps as he was growing up in Albert Lea. He spent the last few years away from Albert Lea playing junior hockey and he’s glad to be back close to home.

“I went to all of the youth camps for the Bruins and my family always went to four or five games a year. That was always fun,” Johnston said. “It’s kind of like a dream come true because I grew up coming to the games and looking up to the players. Now I’m in their shoes and I’m a part of the Bruins now.”

Johnston is one of three Bruins who have local ties. One of those players is his roomate Dylan Cook, a Princeton native who played junior hockey with Johnston last season and the other is Nate Looft, a Mankato native whose older brother had a short stint with the Bruins.

Cook has an aunt who lives in Austin and his grandma went to Austin High School. He made plenty of family trips to town before he was brought in this season to play with the Bruins.

“I went here as a little kid a lot and we always drove by Riverside Arena,” said Cook, who has four goals this season. “It’s great to play here and it’s super helpful being with (Adler’s) family. We’ve been together for the past two years and he helps hold me accountable. We’re really competitive with each other and we get extra workouts with each other when we get back home.”

Johnston has enjoyed playing with Cook for another season and he’s enjoyed living with his friend. The two stay busy by playing video games, P-I-G and street puck.

“He’s someone who I can always talk to if I’m going through something,” Johnston said of Cook. “He’s a brother to me at home. It’s a blessing to have one of my closest friends here with me on the team.”

The junior hockey landscape is wide and vast as it is common for players from across the globe to switch teams on a regular basis as they look to move up and advance their hockey careers.

Sometimes the stars align and players end up in a town but those stories are uncommon. Austin head coach Steve Howard said going after local players can give the team an edge in recruitment.

“We look at it as a way to recruit guys and get them close to home,” Howard said. “It’s a way to win the recruiting battle because these guys could have gone to other teams in the league. If they have family in town, they can stay with family and that’s also nice. It’s a great thing for them to get to play close to home.”

Nate Looft may be new to the Austin Bruins as a rookie defenseman this season, but he is certainly no stranger to Riverside Arena. The rookie from Mankato grew up watching his older brother Kyle Looft, who is now a senior captain at Bemidji State University, play for the Bruins during a 12-game stint in 2017.

Nate also played in Austin once when he was playing in Mankato West, but last year, it took a 20-hour drive from his hometown to where he was playing junior hockey in Saskatchewan, Canada.

He’s happy to be back in a familiar place this season.

“It’s different. I like to have family at games and I like being close to home,” Nate said. “This is my neck of the woods. It’s nice having a lot of local guys on the team and the guys from far away are adjusting well.”

The Bruins (8-2-1-3 overall) are currently tied for first place in the NAHL Central with the Minot Minotauros (10-5-0-0 overall) and Austin will play at Minot this Friday and Saturday, with both games starting at 7:35 p.m.

“Everybody’s playing well and our depth has been awesome this year,” Howard said. “We’ve had some pretty significant injuries and for those guys to step up has been nice.”