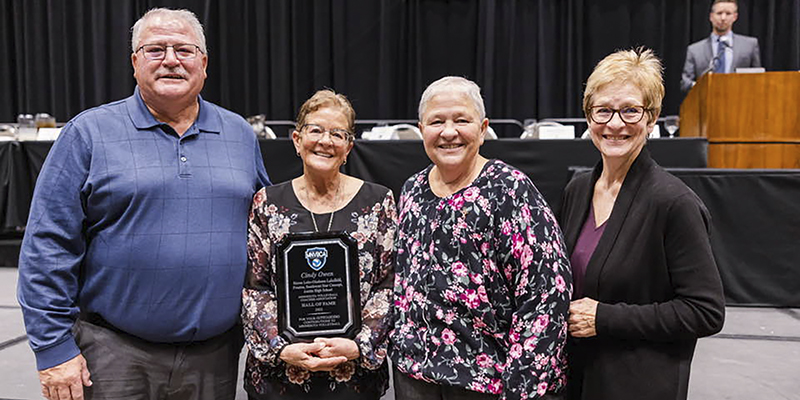 Former Austin softball and volleyball coach Cindy Owen has officially ended her coaching career in the same company as her two Hall of Fame siblings.

Owen, who coached the Packers for a stint at the end of her 35 years of coaching, was recently inducted into the Minnesota Volleyball Coaches Association. She will join her sister Deb Harvey, a former Hayfield volleyball coach, in the HOF and her brother Gary, a former Grand Meadow football coach, is in the HOF for football.

“That’s kind of crazy in itself,” said Owen, who had a big group of family on hand for the ceremony. “I don’t even know how it happened and it was all done without me knowing about it.”

Owen couldn’t tell you what her record was or how many matches she won as a coach as those were not her main concerns. She loved winning matches as a coach, but her main goal in coaching was teaching kids the basics and her biggest enjoyment came from watching them grow as athletes throughout the season.

“I wanted my players to learn the fundamentals. That’s a huge part of the game,” Owen said. “It’s also important for players to learn from their mistakes and believe in themselves. Sometimes kids make a mistake and they think everything is over. One mistake doesn’t decide a match.”

Owen served many roles as a coach over the years. She coached junior high, ninth grade, JV and varsity volleyball as a head coach and an assistant coach.

“I was all over the place at various levels,” Owen said.

Owen graduated from Ellendale Geneva High School. She received her Bachelor’s degree in Education as well as Special Education from Winona State University; she also has a Master’s degree in Educational Leadership from Southwest State University. She has coached and taught in the Preston–Fountain School district as before moving to Southwest Star Concept. Owen also coached at Heron Lake-Okabena-Lakefield.